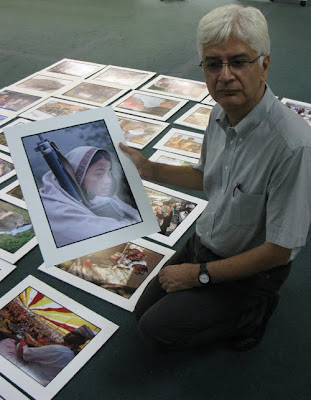 Nepali Times editor and author Kunda Dixit surveys some of the photos for his exhibition at the Investigative Journalism conference in Auckland next weekend. Photo: David Robie/PMC

KUNDA DIXIT believes there needs to be a paradigm shift in journalism training from war correspondent to peace correspondent. The Nepali Times editor and investigative journalist is keynote speaker for the Media, Investigative Journalism and Technology conference at AUT University next weekend and his Frames of War photojournalism exhibition is also being shown. Don't miss out - register today!

Images of Nepal’s civil war going on show in New Zealand next weekend illustrate the aftermath of war in a way words cannot.

Kunda Dixit, Nepali Times editor and coordinator of the Frames of War exhibit, which will be opened at AUT University on December 4, says a picture does not tell a thousand words – it shows them.

“Because of Nepal’s low literacy rate, the picture is the only way to communicate,” he says.

“At many exhibition venues we saw young school girls reading aloud the captions of the photographs to their illiterate grandparents.”

The Frames of War exhibition contains pictures of the Nepali people during and after the 10-year-long People’s War, which ended in 2006. Dixit and his team – including noted Bangladeshi photographer Shahidul Alam and war photographer Shyam Tekwani – looked at more than 3000 images and chose 179 for their exhibition and their book trilogy called The People War.

The exhibition and books do not have pictures of actual battles, partly because most of them took place at night. Dixit believes war journalism is not supposed to be about pictures of battles, it should be about how war affects ordinary people.

The collaboration attempts to make up for the gap in media coverage of the Nepal war by taking the role of a “peace correspondent”, trying to focus on the human cost, the effect on civilians, the women and children.

Most affected
“In all modern wars, they are the ones who are affected the most,” says Dixit.

Dixit thinks there needs to be a paradigm shift in journalism training from war correspondent to peace correspondent.

“Reporters who go to war are almost celebrities. They cover the war as a series of battles, they count the body bags and chronicle the carnage,” says Dixit.

“War correspondents focus on the battle plans, the strategy of the warring sides, and the hardwares of killing.

“A peace correspondent tries to look at the human cost so that the politicians who lead people to war understand the pain they have unleashed, or covering stories that help in the reconciliation process rather than polarising society.”

Dixit suggests studying the roots of violence to discover the definition of peace and that journalists should be taught non-violence through leaders like Mahatma Gandhi, Nelson Mandela and Aung San Suu Kyi.

“Violence is not just war; there is violence in our speech, violence against nature, violence in the home. You don’t have to be physically violent to be violent. Peace is not automatic, one has to fight for it, struggle to nurture it.

The image Dixit finds the most powerful in the exhibit is of a young woman hugging the body of her policeman husband surrounded by the bodies of his colleagues.

“There are many that are so dramatic that they still make me emotional to look at them,” says Dixit.

“It showed the cost and waste of the war, the effect on civilians even when combatants were killed.”

When Frames of War was first shown to the Nepali people, the war had only been over for a little more than a year. Dixit felt the images may incite anger or renew old pain but instead witnessed a lack of revenge.

“Even among the combatants there wasn’t much residual feeling of “enmity”.

“This was remarkably different from other war zones I have covered, and I think it will help in the reconciliation process in Nepal.”

Dixit is the 2010 Asian Journalism Fellow, sponsored by the Asia New Zealand Foundation, and is a keynote speaker at the Pacific Media Centre’s first Media, Investigative Journalism and Technology Conference which will be held at AUT University on December 4-5.

The Frames of War exhibition, showing some 45 images out of the original selection, will open to the public at 6pm on December 4 at WT005 on the ground floor of the AUT Tower Building, Auckland City campus. It will run for a week.

Courtney Wilson is a final year Bachelor of Communication Studies student journalist on internship with the Pacific Media Centre.

Journalism education highlights
HIGHLIGHTS at the dynamic JEAA conference at the University of Technology, Sydney, conference this week included ABC managing director Mark Scott speaking on the changing nature of news, tweeting the news and what the future holds for journalism. It was a digital optimist's view.

Another optimistic view came from Sophie Black from Crikey in a following industry plenary. While many of the industry training heavyweights gave "boring" overviews out-of-touch with the critical challenges facing global journalism, Black said having an online presence w 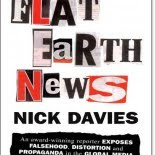 as essential for journalism graduates.

One of the Reportage team covering the conference, Anokhee Shah, reports:

Nick Davies, author of Flat Earth News, and Ginny Dougary were audio-linked from the UK to JEAA2010 for 90 minutes of wit, humour and insight into where journalism practice is heading.

Advertisers are moving away from mass-media but the problem with the mass-media on the internet is that people won’t pay to read general news if they can get the story for free.

But the public will pay for information that they do not have access to otherwise [Read on].