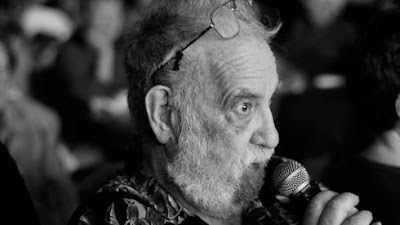 By Peter Boyle in Sydney

MAX WATTS, a well-known personality on the left in Australia, particularly in Sydney, died on November 23.

Max was a left-wing freelance journalist, an occasional contributor to Green Left Weekly and its discussion e-list, and a solidarity activist with many national liberation struggles, including in Palestine, Kanaky, West Papua and Bougainville.

In the 1960s, he was a central activist in Europe working with soldier resistance to the Vietnam War within the US armed forces. Resistance inside the army (RITA) was one of his great political passions.

Max was an extravagant personality and some people may have found him difficult at times, but he was someone always firmly on the left and on the side of all struggles against oppression and exploitation. You could count on that, and he will be remembered by many comrades in the broad left movement.

Max shook his head at the persistent tendency of the left to be over-factionalised and divisive, but he was quick to work alongside those who took up serious struggle. An eagerness to understand and show solidarity with new forces in motion in any country was one of his characteristics.

Max passed away in Sydney’s Royal Prince Alfred Hospital from kidney and heart failure. He was with close friends Rosie, Lydia, Vivienne and Barbara at the time and passed peacefully.

I managed to say goodbye to him in hospital a few days before he died. He was quite feisty then — though somewhat confused and disoriented, probably due to medication.

After about an hour, my attempts to get him to stay in his bed earned me the following last words: “Boyle, your visiting time is up!” It was classic Max.

Max will be formally farewelled in Sydney on December 1 at 11.30am at Camellia Chapel, Macquarie Park Crematorium, Plassey Road, North Ryde. Phone (+614) 11 366 295 for more details.

Friends of Max have set up a Facebook group. To leave messages, photos or other material, go to www.facebook.com and search for “Remembering Max Watts”.

This man had an amazing life. He told me that when he was a boy, a young communist he experienced Hitler in his address at Munich.This on top of his efforts organising resistance within the US Army in Vietnam plus his committment to the people of Bougainville. His lifelong commitment to the cause of liberation should be respected by all