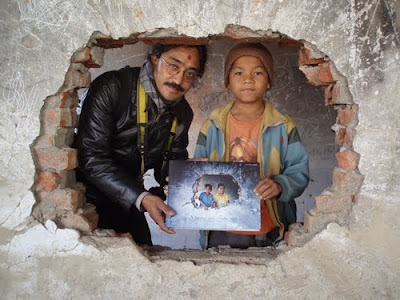 Photographer Amrit Gurung presents a copy of the book A People War featuring many of the “peace” photographs in Kunda Dixit’s photojournalism exhibition of the decade-long civil war in Nepal to Hemanta who was portrayed in the same spot on the cover.

KEY Asia-Pacific, Australian and New Zealand investigative journalists and researchers will gather at AUT University next month for a media “conversation” that will feature diverse issues such as war reporting, scams and global warming probes.

They will also consider the future of independent journalism and map out a strategy for more robust inquiry.

The two-day conference at AUT University on 4/5 December 2010, organised by the Pacific Media Centre, will host an investigative “masterclass” for young journalists, New Zealand’s first seminar on peace journalism, and screen groundbreaking documentaries or multimedia presentations on mining and Kanak independence in New Caledonia, Māori land rights in the Far North, and climate change.

“This is a niche conference and one that features a range of innovative speakers and challenging investigation case studies,” says conference chair Associate Professor David Robie, director of the PMC.

“But there is also a very practical and achievable goal. We hope a group may emerge from this conference to provide more space and support for investigative and probing journalism in New Zealand and the Pacific.”

Television New Zealand Pacific correspondent Barbara Dreaver is the latest keynote speaker to join the Media, Investigative Journalism and Technology conference. She has broken many stories around the region and investigated many key issues.

Other Pacific participants include Koroi Hawkins, chief of staff of Television One Solomon Islands; Patrick Matbob of Divine Word University in Madang, Papua New Guinea; Kalafi Moala, publisher of the Taimi Media Network (Tonga); and Shailendra Singh, of the University of the South Pacific.

Exhibitions of photojournalism by a collective facilitated by Kunda Dixit covering the decade-long Maoist civil war in Nepal - "Frames of War" - and Ngapuhi social issues photographer John Miller (featuring the little-known Ngatihine land rights struggle) plus workshops about challenging documentaries by Jim Marbrook and Selwyn Manning are part of the programme.

A seminar about the making of the award-winning film about global warming There Once was an Island: Te Henua e Noho is also featured.

A new Pasifika media portal will be launched at the conference – it will go “live” then and replace the current PMC website: www.pmc.aut.ac.nz

Don't miss this rare opportunity. Registration for the conference is now open.

More information on the conference website (and registration details): www.ciri.org.nz/conference2/index.html
The Pacific Media Watch database is at: www.pacmediawatch.aut.ac.nz

David, this is a distinguished line-up except for one person - Barbara Dreaver. Her coverage of Pacific affairs has been abysmal. In spite of coming from the region herself, she displays all the cultural sensitivity of a big city tabloid reporter. Never mind her sensationalist beat-ups in places like Samoa, Dreaver has utterly failed to grasp the fundamental issues in Fiji. Lionising her for the quality of her "investigations" verges on the insulting. I wonder what the estimable Shailendra Singh thinks about having her on the same platform. Not much, I'll bet. People like Dreaver and John Campbell are the reason NZ reporters are on the nose in the islands. But I guess they merely reflect the lamentable sense of superiority of most New Zealanders. The disgraceful Paul Henry episode would never have dragged on for so long anywhere else.

Ha ha this guy sounds like the idiot academic at USP, Desmond Amosa, who wrote the classic piece "the evil side of journalism" ... all sour and no grape.

They remind me of a civil servant back home in the Cooks who once wailed at me:

"You wouldn't write all that crap if you knew what was really going on!"

For all his Big Man Talk about Fiji, the Samoa PM remains a regional shrimp who, again and again, proves he can't handle the jandal, let alone answer hard questions.

I guess because someone has to dig up the facts, and gut-poor, anonymous, commentators seem loath to do the job themselves.