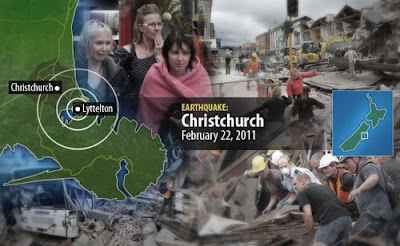 BEHIND the stories of catastrophe ...

Radio New Zealand's Mediawatch has broadcast a gripping 44min special programme this weekend featuring news coverage of the Canterbury earthquake on February 22 - the second in Christchurch in five months.

The efforts were extraordinary - just like the survivors' tales of courage and compassion the journalists were telling.

The reporters, writers and editors who presented the pictures on the country's television screens, the interviews on radio and the words on the newspaper pages and websites told their own behind-the-scenes stories.

In spite of one editorial staff member being killed and four injured in the 6.3 magnitude earthquake, the Christchurch Press produced a special edition the nexr day and published right through the catastrophe - and still distributed the paper as well.

Editor Andrew Holden said there was no power, no television, no way to recharge cellphones and old media - radio with batteries and newspapers - kept local people informed.

"A bit of paper in your hand is very comforting at a time like this," he said.

Canterbury Television, the 20-year-old regional TV station, was devastated when the building collapsed with an estimated 100 media people, language school staff and students and visitors being trapped under the rubble.

Christchurch writer Trevor Agnew talked about the important and creative contribution of CTV to the region.

"It's terrible to be talking about the programme in the past tense but CTV, as we know it, has finished," he said. He hoped the programme would be redeveloped.

The Mediawatch programme was produced and presented by Colin Peacock and Jeremy Rose.