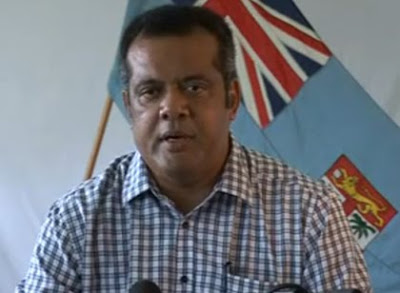 A COUPLE of blog postings ago, Café Pacific observed about the ongoing Ratu Tevita Mara media circus: "This entire saga has all the hallmarks of a carefully orchestrated virtual internet coup. At least, of the propaganda kind. One virtual coupmaster getting one-upmanship over the grand coup master."

And a case of one of dictator Voreqe Bainimarama's key military henchmen trying belatedly to save his skin.

But the YouTube led publicity campaign from the safety of Tonga poses a series of questions that mainstream media don't appear to be asking. Who are the media minders behind Mara massaging his military message and what is their agenda? Why are things being taken at face value? Where is the evidence backing up Ratu Tevita's sweeping allegations?

And why is the anonymous, unreliable and unethical website Coup4.5 suddenly being taken as a credible news source by some mainstream media?

One prominent Fiji journalist sums up the views of several by telling Café Pacific: "Definitely a very suave team is guiding [Mara], directing what he says and his answers to questions. They are also directing his statements and allegations so that it comes in intervals every 2-3 days to sustain and feed the media frenzy."

One of the rare pieces through the smear and counter smear fog to make some sense, is this blog posting by Croz Walsh, a retired professor from the University of the South Pacific. He asks the very questions that journalists should be asking:

Come clean, Ratu Tevita: Who really assaulted the women?
The headlined accusation "Bainimarama beats women" is the latest statement by Ratu Tevita that has been reported - on trust - by the international media.

He promised us that all would be revealed over time but for the moment he is releasing one small story after another that keep the media in titivation mode.

First came the release in which he said he was rescued on a fishing trip that went wrong and he'd fled because he wouldn't receive a fair trial. This was followed by the statement that Banimarama laughed at the idea of elections, and that no elections would be held in 2014. We then heard that Bainimarama was taking his orders from Aiyaz Sayed-Khaiyum, a view earlier reported by the blog Coup4.5.

He then accused Bainimarama and Sayed-Khaiyum of corruption and said Bainimarama's salary, paid by Khaiyum's aunt’s accountancy firm, was $700,000 a year. Much of this story was also earlier reported by the blog.

This was followed by general accusations of torture that he said he witnessed, and for which he now apologised, but in which he played no part. He said a small "hit squad" carried out the torture, presumably on Bainimarama's orders. But he was the commanding officer.

And now he claims Bainimarama hit three "pro-democracy" women — Visili Buadromo, Jackie Koroi and Laisa Digitaki — at the Queen Elizabeth Barracks just before Christmas in 2006. He says that Bainimarama's son was the other officer who hit the women, and made the point that Bainimarama only hit women; he never saw him hit men.

Coup 4.5, Michael Field and others have now taken up the "Bainimarama hits women" story. I have little doubt that the general outline of the story is correct. The coup had only just taken place. The situation was unstable, and there was active opposition from a small group of "pro-democracy" activists, including the three women, that was enthusiastically reported by the local and international media. The military was unsure of its position and sought to silence opposition by intimidation. Not nice, but over-reaction is not unknown even in democracies, when the established order is unsure of itself.

But here the details become hazy. Ratu Tevita says people had always thought it was Pita Driti (charged earlier this month for sedition - together with Ratu Tevita - and attempted mutiny) who beat the women. But he was there and saw what happened. It was not Driti, he said, but Bainimarama, dressed in brown overalls with no military insignia, who started the attack, joined by his son.

He said it was dark and all that could be seen were silhouettes.

But afterwards, not one of the women mentioned Bainimarama or his son. They maintained it was two other officers, Pita Driti and Ratu Tevita.

Laisa Digitaki said she recognised Driti's voice, and both she and Visilia Buadromo told Human Rights Watch, probably the world’s leading independent organisation dedicated to defending and protecting human rights, that they were assaulted by Driti—and Ratu Tevita Mara.

This leaves one wondering.

Why, only now 4½ years after the incident, do we hear Bainimarama's name mentioned for the first time? Apart from the obvious purpose of smearing Bainimarama, is it possible that Ratu Tevita is also trying to cover up his part and Driti's part in the assault? These are the sorts of questions the media should be asking him before they take his word on trust.

They should be asking how he has so much knowledge on so wide a range of topics. I doubt he can have witnessed all, and his statements can be no more reliable than his sources, which —other than Coup 4.5— he has not revealed. The media should ask him about his sources.

They should also ask what's happened to the documents he said he brought with him on the boat to Tonga that he said would prove what he said. Did he show them to Barbara Dreaver when she interviewed him soon after his arrival in the old British Residence’s house in Nuku'alofa? Did she ask to see them? Has anyone seen them? Has anyone thought of asking to see them?

He now says he's thinking of making a statement to the UN about human rights abuses in Fiji. For this he will have to rely on more than the prompting of Coup 4.5. He will need the documents.

Otherwise, on this issue at least, it will be his word against those of the women who said he assaulted them— and not Bainimarama.

The saddest episode of this saga is the blind dependency of the mainstream NZ media, including NZ Herald and TVNZ on a rag-tag blogsite like Coup 4.5. This is indeed a classic example of the tail wagging the dog. Here the First World media were captive of a political propaganda machine, a 'coconut wireless' of a Third World country, masquerading as a media, when in fact it is the propaganda arm of Qarase's racist and ethno-nationalist SDL party. They are out to wrest back Fiji's political control under the guise of elections which is equated to democracy. Fiji have had so many elections since 1987, yet most failed to deliver democracy, social justice and equality to a large number of Fiji citizens. That is what NZ government and its mainstream media fail to appreciate. If Khaiyum had Bainimarama in a trance and manipulated Fiji’s indigenous establishment, so did a rag tag propaganda machine, of NZ’s mainstream media.

Finally!!! Some sensible reporting. With all the rubbish that's out there, we don't know what the truth is any longer. Thank you Cafe Pacific!

Alleluia....thanx Cafe Pacific...finally some sensible reporting cos listening mara's interviews is a disgrace to those that really love our country and where its heading!!!!!!!!!

Why the outcry now. all you guys out there are just a bunch of losers as a matter of fact becuase you so much hate the AG to be on the side of the PM in moving the country forward. don't you notice the big change we are all enjoying at this point in time? You are all racists which the PM and most of us trustwothy people dislike.