Freedom of the press on Fiji? You’re joking! 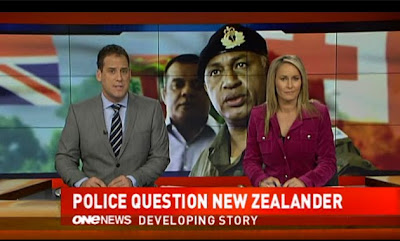 Independent Fiji blogger Crosbie Walsh pens an "editorial" on a New Zealand Herald editorial and also takes a swipe at the Sydney Morning Herald over misleading coverage about the Ratu Mara saga:

I RECEIVED an email from Claire Trevett, deputy political editor of New Zealand's largest circulation newspaper, last Monday. “I read your very good analysis on the Ratu Tevita situation and I was hoping to speak to you at some point today to get some comments on the developing situation,” she wrote. We spoke for a while that afternoon and last Wednesday the New Zealand Herald published her story NZ may yet admit Fijian fugitive.

It reported two comments contrary to those typically published by the NZ media recently. Fiji Solicitor-General, Chistopher Pryde was cited as rejecting claims that LtCol Mara would not get a fair trial in Fiji, saying there was no interference by the government in the courts' decisions. And I was cited as saying the situation was embarrassing for the commodore but I believed Ratu Tevita's actions were “ personal and the issue would subside quickly. We all know Fiji is divided,” I said, “but I don't really think Ratu Tevita can split the military from Bainimarama."

At long last, I thought, a factual article with opinions from people of differing views, leaving readers to form their own conclusions. My faith in the NZ media went up a notch, but it was not to last.

On Saturday, the NZ Herald editorial announced "Dictatorship's hold on Fiji is crumbling". I have no idea who actually wrote the editorial. The Herald does not use bylines and has several editors. The most surprising thing about the editorial is not that it swallowed and echoes Ratu Tevita's story but that it provided not one shred of evidence to support the claim in its heading.

We learn that “sooner or later Fijians will wake up"; that "dictatorships fall when basic human resentment … can no longer be repressed (and) Fijians have much to resent.”

We are told that Ratu Tevita's flight “shows that resentments now boil within the regime,'” and, to take the words from the horse's mouth, that Fiji is a "hateful dictatorship;" the PM is “ill, morally and intellectually bankrupt", and acting as a "hand puppet" of Fiji's civilian Attorney-General, Aiyaz Sayed-Khaiyum, and that Ratu Tevita's YouTube video “also targeted those still serving in the armed forces".

We are told Ratu Tevita was "arrested" before fleeing, and the arrests were “not reported in the censored Fijian media.” In fact, the State Prosecutor asked for his arrest after he appeared in court on May 4 on a charge of sedition because he thought he (and the other accused Brigadier-General Pita Driti) were flight risks. But the judge (who, we have been told, is not independent of government influence) disregarded the prosecutor's request and granted them both bail.

We are told that Bainimarama thought himself betrayed because Ratu Tevita and Pita Driti “had given advice to their commander on how to soften the regime's approach to public dissent.” This is Ratu Tevita's uncorroborated story, and the sedition charge was quite unrelated to this “advice,” if indeed it ever took place.

We are told “the advice he gave Commodore Bainimarama ... led to his being charged and now his public stand from Nuku'alofa exhibit great courage deserving of national and international support.”

We are told that “Fiji has predictably dragged out allegations that the formerly trusted colonel is being investigated over missing funds from Fiji Pine.” When, in fact, the allegations were around well before he fled. They had even been mentioned on the anti-government blogs.

And, finally, we are told “a leading Fijian Establishment military man is calling things as they are” which leaves me wondering if the NZ Herald invited Ratu Tevita to ghost write the editorial. As for the heading, the “Dictatorship's hold on Fiji is crumbling,” even one small shred of evidence would have given the story some credibility.

This is the is the state of my country’s reporting on Fiji.

I quote: “Fiji's military government is tight-lipped on accusations of torture in its barracks and claims it has no plans to hold democratic elections as promised.”

I quote: “He (Ratu Tevita) said democratic elections in 2014, which both Australia and New Zealand have been pushing for, were "very unlikely" to happen and even if they do only a select few political parties will be allowed to stand.”

Who said elections would not be held? The Fiji government, as in the first quote, that has “no plans” to hold elections? Or Ratu Tevita, who thinks they are “unlikely”, as in the second?
Readers could well think it was the government, which it was not. And since when have “Australia and New Zealand been “pushing for elections …in 2014”? They have always called for elections before 2014.

I’d like to think Tamara was in a hurry and did not check her story, but there have been so many similar inaccurate and misleading reports on Fiji lately that I have to wonder.

Retired New Zealand academic Professor Crosbie Walsh was founding director of development studies at the University of the South Pacific and lived in Fiji for more than eight years. He publishes a specialist blog on Fiji affairs.