The strangely fishy story of the fugitive colonel 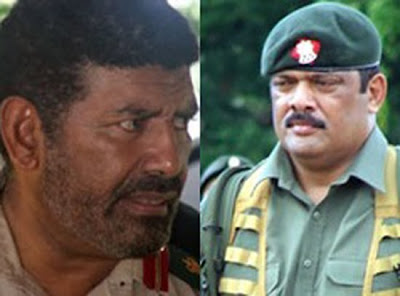 FUGITIVE colonel Ratu Tevita Uluilakeba Mara has certainly tossed a proverbial cluster bomb in the kava bowl. His flight last week from Fiji to Tonga after being charged with sedition in the alleged mutiny plot on May 4 doesn’t check all the usual boxes of a human rights case.

Fishing trip gone wrong? Yeah right, Roko Ului. How come the so-called distress signal was picked up by the Tongans, but not by Maritime New Zealand, Fiji authorities or the patrol ship HMNZS Otago deployed near by?

And how come Roko Ului was seen staying at a Kadavu resort the evening before his "rescue"?

Escaping from the corrupt justice system under the “hateful dictatorship” that would not allow him to defend himself? Yeah right. That’s why he was in a civil court and freed on bail. Incidentally, why no court martial in this case? And why leave fellow accused Brigadier-General Pita Driti (charged with sedition and attempted mutiny) to face the music? The Otago Daily Times in the best editorial on the affair rightly honed in on the self-interested aspects of this case.

No, this entire saga has all the hallmarks of a carefully orchestrated virtual internet coup. At least, of the propaganda kind. One virtual coupmaster getting one-upmanship over the grand coup master. Plus a touch of Indo-Fijian bashing with a racist attack on Attorney-General Aiyaz Sayed-Khaiyum.

But is it really as credible as it is being portrayed in the media? At least, the supporters of the SDL now have upper hand in the propaganda war, just when the initiative seemed to be slipping relentlessly towards military dictator Voreqe Bainimarama’s side of the stand-off with Australia and New Zealand.

The defection of Mara, the youngest son of Fiji's founding father Ratu Sir Kamisese Mara, who was ousted as president during the George Speight attempted coup in 2000, is a blow to the regime. The implications for the Military Council are serious.

A remarkable aspect is how long it took for this story to take off in the New Zealand media. Another Pacific reporting coup? Only two news outlets were carrying the story of Mara’s YouTube bitter attack on the regime and news of his “escape” to Tonga last Saturday evening – Fairfax's Stuff.co.nz and Pacific Scoop. It took the best part of another day – a Sunday, with skeleton staff on duty at many media outlets - before the news gained mainstream media traction after Bainimarama had branded the escape “despicable” and confirmed Mara was under investigation over an alleged $3 million missing from the Fiji Pine Board.

Mara’s three videos on YouTube calling for “justice to prevail”, one in Fijian aimed at priming his loyal soldiers for opposition to the regime, were a masterstroke and he replied directly to Bainimarama’s claim:

[Bainimnarama] has accused me of being under investigation for the disappearance of $3 million from the Fiji Pine Board. These are the desperate attempts by a mentally and morally bankrupt man to smear the Mara name. There is no truth to the allegations. In fact that money went missing long before I became chairman of the Fiji Pine Board. And it was under my chairmanship that the loss was discovered and it was I who made it known to the authorities. All of this is recorded in the minutes of the Fiji Pine Board.

The influential New Zealand Herald seemingly never bothered to have one of its staff cover the biggest South Pacific story of the year so far when it first unfolded. Instead, a workmanlike like downpage story was published on page 3 in Monday’s paper from the German newsagency DPA reporting from Wellington. While deputy political editor Claire Trevett did eventually get in the act with a story for Tuesday morning’s paper, she cited the anti-regime blog coupfourpointfive, which has little credibility as a source and was this week exposed for its “outlandish” smear tactics against leading academics and journalists whose commentaries it doesn’t like.

Today Trevett followed up with a story describing Professor Crosbie Walsh, a usually well-informed publisher of an independent blog specialising in Fiji affairs, as a “qualified supporter of Commodore Frank Bainimarama's stated goals for Fiji”.

Hello? Roughly 90 percent of commentators and sources about Fiji used in the New Zealand media are pro-SDL or supported the old corrupt “democratic” regime of Qarase, or are plain biased. And yet their lack of neutrality is never “labelled”.

It was worse in The Australian, where the not-so-neutral Dr Jon Fraenkel, a research fellow at the Australian National University, described Fiji-born journalist Graham Davis as “an Australian-based supporter of Bainimarama's government”. This prompted Davis to reply:

Jon Fraenkel is entitled - like anyone else - to oppose any resumption of Australia’s ties with Fiji. But he is not entitled to misrepresent those who oppose his own hard-line stance. To cast me as “an Australian-based supporter of the Bainimarama regime” is clearly designed to discredit me by casting me as an activist and polemicist rather than as an independent journalist and commentator.

The record shows that I have variously described Frank Bainimarama as “wilful”, "obstinate" and "intolerant of dissent" , criticised his suppression of the media, the continuing state of emergency and the reappointment of his brother-in-law as head of the navy. Hardly unqualified support.

What I have done, quite legitimately, is to point out Bainimarama’s multiracial agenda as opposed to the racism of the government he deposed and his pledge to hold truly democratic elections in 2014. I have argued for a resumption of Australian links to Fiji to help achieve those goals and to forestall its growing links with China and the threat that poses to the geopolitical balance in the region. That is also the basis of the Lowy Institute's change of heart on Fiji, so I am hardly alone.

The Fiji propaganda wars are as murky as ever. But when the dust finally clears from the Mara storm, extradition or no extradition from Tonga, some of Bainimarama’s domestic support will certainly have eroded.

Mr mara's action is just a mere desperate attemp to evade the law that seems to be inneviatably catching up to him for his somwhat selfish and unruly actions in the past.

He claims that he is now realising the corrupted form of leadership that currently prevails and it is his duty to unite the people of fiji and to overturn the current administration and bring peace and justice to the land. This statement may be very appealling and may sound patriotic to those that are ignorant but not to the many who have suffered his torturing methods during the takeover. He claims that the people of Fiji should stand up and that no fellow fijian soldier would lift a weapon against a fellow Fijian but it was his speciality to give hell to the innocent fijians that are ussually taken in for political and criminal misdemeanors.

One may also quiry the timming of this unexpected offer of emancipation for the Fijian people. It could be a believable scenario if he had actually taken this leap when he was actually in power and had the control and the loyalty of his fellow soldiers but it sounds as if it was not as important than coz he was part of the administrationn itself. The freedom and the well being of the people only seem so important to him when he was being charged of such offense. This just goes to show that he is tring to use the patriotic feelings of the innocent people of Fiji for his ulterior motives in trying to gain power for his own personal agenda.

He pleads with the leaders of NZ and Australia to take more drastic steps and sanctions in opposing the current regime; where he specifically advices the cutting off of all AIDS and tourism. Little does he know that this proposed actions will affect the poor people of fiji more, of those he claims to stand for, than it affects the govt and which will only take the country further back form where it is now.

Its only sad to see that the once very prominent and respected name (Mara) in fiji is being reduced to a mere political brand which does not hold any significance any more.

I am not a fan of politics but i am a citizen who just cannot see any sense in a corrupted person trying to fight for freedom for my country..He is just not the annointed one and he will never be.