Mara, Kaitani and the charade of Fiji democracy 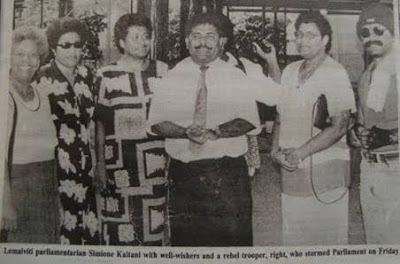 ANOTHER "SMOKING GUN" picture? This time George Speight's former "Minister of Disinformation" Simione Kaitani is pictured with an armed Speight rebel and "well-wishers" on 25 May 2000 - just six days after Mahendra Chaudhry's elected government was taken captive at gunpoint in Parliament. The Fiji Times caption said at the time:

Lomaiviti parliamentarian Simione Kaitani with well-wishers and a rebel trooper (right), who stormed Parliament on Friday.

The picture comes from the archives of former Fiji Daily Post publisher and columnist Thakur Ranjit Singh who has other similar images in his collection. Not to mention the controversial Fiji Television Close-up programme featuring Kaitani and an alleged "incitement" incident. Kaitani later also had the Information portfolio in the Laisenia Qarase government for a period.

Kaitani was among the supporters for Fiji military renegade Ratu Tevita Mara at a public anti-regime meeting in Queanbeyan, near Canberra, last weekend. Mara is currently in Australia on a Tongan passport (he is a cousin of the king of Tonga as well as being youngest son of Fiji's founding prime minister Ratu Sir Kamisese Mara) drumming up support. He is expected to visit New Zealand on a restricted two-day visa next week.

According to Singh in the Fiji Sun yesterday:

Mere elections do not deliver democracy. One that does not grant freedom, equality and social justice to all its citizens is not worth defending.

A seminar was organised by the Coalition for Democracy in Fiji in late December 2006, in Auckland, just weeks after Commodore Voreqe Bainimarama ousted Laisenia Qarase’s supposedly democratic government. This author presented a paper and accused New Zealand and Australian governments of hypocrisy, double standards and being ungrateful and blinkered neighbours because of their lack of understanding and appreciation about Fiji’s fundamental ills.

NZ mainstream media, which lacks diversity in its newsrooms, was also not spared for its inability to analyse the real truth about Fiji, and appeared to be singing from the same hymn sheet of their government’s dogmatic foreign policy on Fiji’s faltering democracy and governance issues.

It appears nothing much has changed in those last four and a half years. Australia granted a visa to the renegade military man Ratu Tevita Mara, aka Roko Ului, to address the so-called democracy movement in exile near Canberra during the weekend.

It is interesting to see the makeup of this dubious forum: SDL, Vanua, Church, the nationalists, unions and the flotsam and jetsam of Qarase’s SDL stalwarts who were off-loaded from the racist gravy train. Among other things, they wish to bring back the hegemony of the unelected and unrepresentative Great Council of Chiefs, which has been an obstacle to real Westminster type of democracy in Fiji.

Fake revolutions like the Jasmine, Cinnamon, Tumeric or any other spice or Color you attach, using that pretext to usher in a synthetic and externally manufactured democracy is anathematic to liberty and the intelligence of critical thinkers.