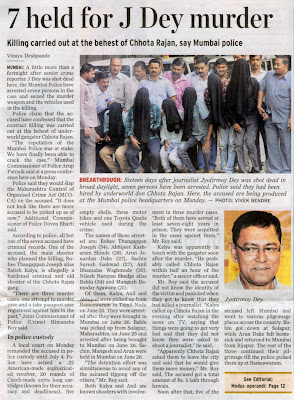 WHILE a leading Indian politician was railing against media sensationalism and lack of credibility and a major Asian communications conference was meeting in Hyderabad this week, police in Mumbai were crowing over the arrest of seven alleged assassins of a prominent investigative journalist in a case that has shocked the nation.

Veteran MiDDay crime journalist Jyotirmoy Dey was gunned down in a street not far from his home on the outskirts of Mumbai in a daylight gangland style execution on June 11.

While police displayed the seven hooded suspects in a press conference after their arrest this week and showed off a .32 calibre American-made revolver and 20 rounds of “deadly and accurate” Czech-made extra long cartridges and five empty shells - which they claimed were used in the murder - no motive was revealed.

But the police claimed the journalist had been killed under a supari (contract killing) order by a notorious gangland leader, Chhota Rajan.

Six of the accused had criminal records, including the alleged gunman Satish Kalya, who is already facing three murder cases.

Welcoming the breakthrough by the police who were under tremendous pressure to crack the crime, the national newspaper The Hindu said in an editorial that the assassination had been meticulously planned over 20 days.

Investigations were still under way and the “3000 emails in Dey’s in-box have to be examined for crucial evidence”. The newspaper added:

Having caught the suspects, the police have an even bigger challenge – unravelling the motive behind the brazen killing. Most crime reporters have excellent contacts with the underworld and a network of informers. Dey did not speak to anyone of a threat to his life or demand protection.

News reports said the suspects, while confessing to the murder, claimed they did not know Dey was a prominent journalist.

Dey, 56, had been investigating and writing on the oil mafia in India, underworld links with policemen and other issues. Journalist groups were branding his murder as an assault on the Fourth Estate of democracy. He is the third Indian journalist to have been murdered so far in 2011.

Reporters sans frontières called for a full investigation to be carried out by a federal agency to ensure impartiality by investigators. But the Mumbai High Court has ruled that local police can continue their investigation until a July 6 deadline and to produce a report.

As Indian media splashed reports about the arrest of the suspects, CNN-IBN was reporting on a new clampdown on the media by politicians, including assaults in the state of Uttar Pradesh. Its reports were billed with the speculative headline: “Is the media the new enemy of politicians?”

Ironically, The Hindu reported the leaders of various parties calling on the media not to sensationalise news and to maintain credibility in shaping public opinion.

Speaking at the launch of Jagruti Television news channel in Hyderabad last Sunday, government whip Y. Sivarami Reddy criticised some media for promoting a handful of politicians and the “street rowdy” instead of reporting on people who were “changing society for good”.
Chairman of the state’s Economic Programme, N. Tulasi Reddy said media was the lifeline for survival of democracy. But he warned that as media organisations were increasing in India, their credibility was decreasing. He praised Jagruti channel for striving to promote a society with moral and ethical values instead of pandering to sensationalism.

Meanwhile, a four-day Asian Media Information and Communication Centre (AMIC) organised annual conference on “the challenges and opportunities of globalisation, new media and the rise of Asia” featured five speakers from the Pacific among the more than 400 participants. The Pacific “delegation” was AMIC board member associate professor Martin Hadlow of Australia’s University of Queensland; Joys Eggins of the University of Goroka in Papua New Guinea; associate professor David Robie, director of New Zealand’s Pacific Media Centre; and Dr Munawwar Naqvi of Unitec in NZ. 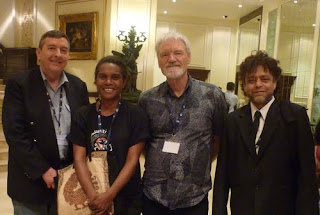 Dear David, Opt and quick presentation on the sad death of 'Jyothiday', an Indian Investigative journalist.