Memo to Mara: Inspire Fiji's 'jasmine revolution' and then face a treason trial 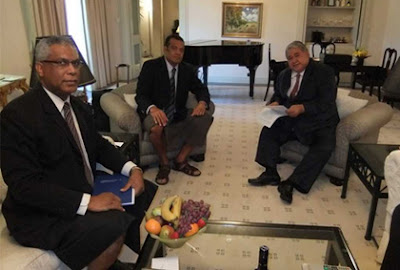 PHILIP RAMA of the Auckland-based Coalition for Democracy in Fiji has penned his protest against allowing a coup leader tainted with alleged human rights abuses to come to New Zealand. In an open letter, he says:

Mara was a very senior military officer who was involved in the planning and staging of the coup of 2006. He was a member of the Military Council of Fiji that imposed the oppressive decrees in Fiji.

He was the commander of the largest unit of the army and his soldiers enforced those decrees arresting people who did not comply with the decrees.

Even if he did not torture those arrested, he knew what would happen to them when his soldiers handed them to Commodore Voreqe Bainimarama’s torturers.

He is guilty of serious crimes against the people of Fiji.

But for his falling-out with Commodore Bainimarama, he would have continued enforcing the oppressive military decrees.

If Mara wants to end the military rule, as he is reported to said, he should go back to Lau and from there inspire the Fijian people to rise up against the military government in a Fijian-style “jasmine revolution”.

And when the revolution succeeds, Mara should be tried for treason along with Bainimarama and the others behind the 2006 coup. NZ should not allow Mara or any other person involved in the 2006 coup to come here.

John Key and Murray McCully mistakenly think allowing the likes of Mara to visit here will hasten the collapse of the military regime in Fiji.

If anything, it will strengthen the resolve of Commodore Frank Bainimarama and those around him to maintain their grip on power. That is the only way they can preserve themselves.

And when Mara tells us how bad the situation is in Fiji, what will NZ do that it has not already done.? Nothing will change in Fiji unless the indigenous people act.

They came out in support of the coups staged by Sitiveni Rabuka and George Speight. They stood silently during the ousting of a democratically elected Prime Minister and the removal of people and institutions that criticised Bainimarama.

This is where Mara needs to begin is he wants to overthrow the military government.

He will need to convince Fijians and those in the army that they must respect the values of democracy and democratic institutions, uphold the constitution and the rule of law.

And the army must be subservient to the democratically elected civilian government.