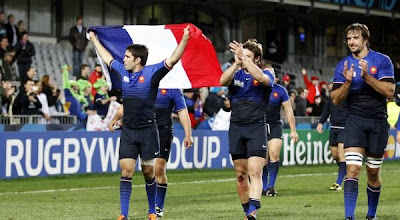 Dimitri Yachvili leads a victory parade after defeating England 19-12 in the quarterfinals.

A bunch of "sans culottes'' - the French republican revolutionaries of 1792 who beheaded king Louis XVI - will replay their Valmy on Sunday against a coalition of Anglo-Saxons, led by the lords of the game, the All Blacks.

There is no argument from the French about Richie McCaw's side deserving to win the World Cup. They are the best team, play great rugby and it would be a reward for New Zealanders who have been great hosts throughout the tournament. And as rugby fans, we would be perfectly fine with the All Blacks lifting the Webb Ellis Trophy.

But competition is not about deserving to win. Why would professional sports have any morality when society does not? The only true thing is that, at the end of the day, the winner is always right.

The French might not have deserved to beat Wales last Saturday. There was nothing to be proud of. But France, in their sporting history, have suffered enough bad nights, unfair calls and stolen games to, for once, be content with victory.

The world's press could do nothing worse than labelling this French team "thieves''. Coach Marc Lièvremont will put up a handful of articles in the changing room at Eden Park on Sunday and remind his players the last team who won there had blue jerseys on. If there is one squad which can break the Eden Park hoodoo, it's Lievremont's dirty XV.

Despite having guided France to the final, Lievremont's legacy will be easy to conclude: World Cup-winning coach or absolutely nothing.

After four years in charge, the former second division coach is a long way from the promise he made when he got the job. He vowed to revitalise French pass-and-run rugby. But it's almost impossible to build an attacking team in French rugby because of the war between the clubs and the national team that sees the clubs wield power over players. It took time for Lievremont to understand this.

There were rumours of disarray in the French camp during the tournament. Far from it. It was only the result of the clash between a straightforward guy, who verbalises publicly everything that goes through his mind, and players who were, for a long time, too shy.

After several notorious losses, the latest against Tonga in pool play, it seems Les Bleus now completely assume that French flair is a myth. It was mostly the violence of Franck Tournaire and Cedric Soulette in the rucks that led to victory in 1999 and Thierry Dusautoir's 38 tackles in 2007. This French team have also decided the only important thing is winning.

The backbone of French rugby has always been the feeling of "one against all''. That is how Les Bleus beat the All Blacks in 1999 and 2007. They were scared, they ware ashamed, they were shattered and they rose from it, stuck together and reversed the course of history. Lièvremont knows that only too well - he was in the team 12 years ago.

It is probable that the torrent of harsh words from the press in New Zealand, Australia and the UK will only make the French resolve stronger.

Lacking respect for your opponent is the worst insult in rugby. France have paid for it several times, including a few weeks ago against Tonga. They would love nothing more than to prove a lot of people wrong.