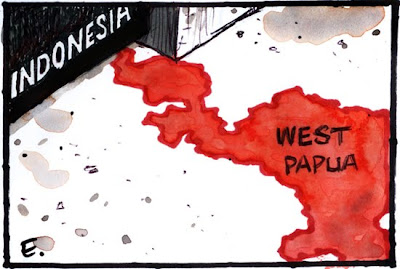 © 2011 Malcolm Evans PJR
THIS Malcolm Evans cartoon in the latest Pacific Journalism Review spotlights the blood on Indonesia’s hands in four decades of occupation in West Papua. Tension has been building up since early August as thousands of Papuans prepare for their Third Papuan People's Congress in Jayapura. The strife has escalated and erupted into shooting on Monday by Indonesian security forces at the Freeport-McMoran gold and copper mine at Timika, Papuan Province, as they tried to suppress striking miners. At least one man was shot dead and about a dozen others wounded.

Kontras, the Commission for the Disappeared and Victims of Violence has condemned the shooting of the Freeport workers who were seeking negotiations with the management of the company. Since the strike began on September 15 there has been no sign that the management is seeking to provide any space for peaceful dialogue which could address the issues for both sides.

At the time of the shooting on October 10, about 8000 workers were involved in the protest against the company for recruiting new workers to replace those now on strike. The strikers marched from their SBSI trade union headquarters to the mine drains, a distance of about 500 metres along a road that was six metres wide. A short distance away, hundreds of policemen were standing on guard and they opened fire. Petrus Ayamiseba a catering worker at the company was shot in the waist and died.

As human rights protests gathered momentum this week, Pacific Journalism Review was being published with a comprehensive 39-page report on Pacific media freedom. The PJR report quite rightly focused on West Papua as the worst territory for human rights abuses against journalists. In fact, West Papua is now considerably worse than Fiji in terms of brutal assaults on media freedom. The research journal, published by the Pacific Media Centre, said in an editorial:

By far the most serious case of media freedom violations in the Pacific is in Indonesian-ruled West Papua — far from international scrutiny … In August, in particular, “sustained repression has also hit the news media and journalists”. At least two journalists have been killed in West Papua, five others abducted and 18 assaulted in the past year.

Ten West Papuan activists were arrested by Indonesian authorities in Jayapura last week for being in possession of material that featured the banned West Papuan Morning Star flag of independence.