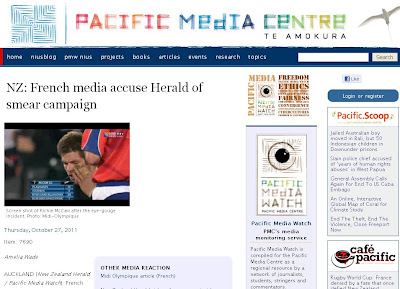 AFTER the All Blacks’ achievement of finally winning the World Rugby Cup against a French revolution 8-7 last weekend after 24 years of self-absorbed angst, a sour mood has overtaken the post-final wave of euphoria. And the New Zealand media is deservedly taking the flak for it – especially the New Zealand Herald. In the eyes of many French rugby scribes, the Herald and other media have been waging a vengeful and vindictive smear campaign against France, Les Bleus and coach Marc Lièvremont who has now bowed out from his four-year tenure. The relentless and bitter campaign has been obvious to anybody following the relationship between NZ and French rugby. Of course, it has nothing to do with the embarrassing losses in 1999 and 2007 – or being within a whisker of pulling off perhaps the greatest humiliation of all, a Gallic sacking of the Mt Eden fortress and snatching of the World Cup from under our noses. As Ross Hastie noted in Planet Rugby:

The Fédération Française de Rugby did Lièvremont a massive disservice by naming his successor, another former Bleu, Philippe Saint-André, before the team had even left for New Zealand. As a result, journalists with a score to settle were giving free rein to fire away while the players were given licence to ignore what they didn't want hear from their boss.

But to the credit of the Herald, it has actually run a story highlighting French media criticism aimed at itself. Along with other critical accounts of the NZ media bias, this balanced commentary by Gordon Campbell is refreshing:

One of the rationales for the massive expenditure on the Rugby World Cup – at a time when for instance, every hospital in the country is being run into the ground – is that the tournament is serving as a valuable showcase for New Zealand to the world. Well, if that is the case, could Keith Quinn and his anonymous sources in the All Black camp please shut the f***up with their campaign to vilify the French team?

The rest of the world admired the French efforts in the final. The efforts being made to the contrary are only underlining to the world – and to the other 50 percent of New Zealanders who are not obsessed with rugby – that the All Blacks and their fans can be just as ugly and graceless in victory, as they are in defeat.

About this alleged eye gouging by the French centre Aurelien Rougerie ….no one laid an official complaint that an eye gouging occurred. The player allegedly gouged – Richie McCaw – is not saying that he was deliberately eye gouged. In fact, in the Guardian, McCaw said this about French captain Thierry Dusautoir:

Dusautoir showed what he was made of last night. Every time I have played against him he has had one hell of a game. He has been around a long time and he inspires his team by the way he plays.

That surely, should be the end of it. If you’ve got the evidence, you front up. Instead, some anonymous elements within the All Blacks camp have taken the back door route – they’ve avoided fronting up, while using Keith Quinn as a conduit for allegations of foul play. The attempt to smear Dusautoir has been particularly contemptible, and looks like petulance at him being named man of the match, and IRB player of the year.

Apparently Dusautoir’s sin was that he was “close” to the incident, and did nothing about it. Yep, three minutes before the end of a RWC final, Dusautoir has an over-riding obligation to be offering solicitous comfort to Richie McCaw. Good grief. If McCaw got an eye injury this was no less accidental – and did far less lasting damage – than McCaw’s knee to the face of French flyhalf Morgan Parra [which broke his nose – Café Pacific], far earlier in the game.

According to the French, their team members felt unable to leave their hotel on the night of the victory for fear of being attacked by celebrating All Black fans. (What would have happened to them if the French had won doesn’t bear thinking about.) Later, a photographer harassed the team at a private function and after being ejected tried to shoot photos through the restaurant window – and all the subsequent headlines were about the angry response to this cretin by one French player. Right.

We have lavished millions on this RWC – largely to the benefit of a fortunate few bar owners and hoteliers. No doubt, some business advantages will occur downstream in the wake of this tournament – but you can bet that RWC Minister Murray McCully won’t be ordering an opportunity cost analysis on whether this huge RWC spend-up really was the most effective way of promoting New Zealand as a business and tourism destination.

Footnote: The New Zealand Herald, which prominently featured the Quinn allegations also carried a highly selective story headlined “World Media Reacts : NZ Nailed It” that began with a largely positive report from the Guardian’s Robert Kitson. To get to Kitson, the Herald had to ignore the article in the same issue by the Guardian’s chief sports writer Richard Williams. For the record, here’s what Williams said:

All New Zealand did was win, which was presumably all they wanted to do in order to end their famous 24-year drought. They had hosted the tournament beautifully but when it came to the showdown they derived disproportionate benefit from home advantage, including a few free gifts from a referee who spent the first half infuriating even neutrals by giving virtually every decision to the men in black.

France’s fans were unable to make themselves heard in a stadium draped in black but their team’s display was full of spirit, generosity, creativity and adventure… and were hugely unfortunate not to become the first side from their nation to capture the Webb Ellis Cup.

The All Blacks were grim, pragmatic and joyless: a caricature of a stereotype. Nothing they did in the 80 minutes truly illuminated the game. Their try was a gimme, tinged with a hint of obstruction, and they never came close to scoring another…"I’m tremendously sad but tremendously proud, too,” [coach Marc Lièvremont] said during a dignified post-match press conference. He made no reference to the collision between Richie McCaw’s knee and the temple of Morgan Parra in the 11th minute, which forced the early removal of France’s own influential flyhalf.

For the Guardian’s overview article on how New Zealand had successfully hosted the tournament, go here. It ends with this paragraph, which should also be kept in mind alongside the hosannas of praise for our hosting of the RWC, when assessing the tournament’s tourism legacy:

Abiding memory : A nation so immersed in their sport that it was possible to watch rugby 24 hours a day even if the down side was trying to dodge questions about England in every bar and restaurant visited. It was almost possible to forget the rip-off prices. Almost.