Crocodile tears over Suharto's death - brutality in the Pacific

Amid the crocodile tears over Suharto's death and the glossing over the appalling crimes carried out under his dictatorship, it is refreshing to read accounts calling like it was. The little Marlborough Express in NZ was scathing about Suharto's "corruption franchise" and the regime's brutality against aspirations for independence in East Timor and West Papua:

The death of former Indonesian president Suharto brings into focus again the fate of East Timor and the role of Australia and, 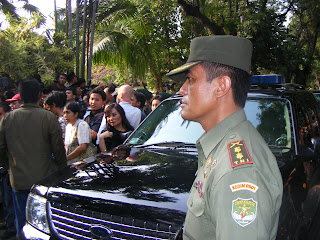 to a lesser extent, New Zealand in that country's life.
Not that it has really been away with half a million people still displaced and sporadic unrest in that fledgling nation. It also brings to the forefront the continuing struggles in places such as West Papua which are still fighting to rid themselves of Indonesian control.
The newspaper's editorial was rather dismissive of Suharto and the bank balances of the Indonesian elite.
And as the Suharto regime, which came in on the back of a failed coup and stayed on as an illegitimate military government, exploited the country's wealth to the utmost, civil liberties were the victim.
It is thought up half a million people lost their lives during the Suharto years. And in the middle of this brutal regime was East Timor.
As the world looked on with seeming indifference in 1975 the borders of Indonesia were enlarged to include the eastern half of the island of Timor.
Jakarta felt threatened by the setting up of an independent leftist state and moved to stop it. In the next 20 years East Timor lost 200,000 people under the Indonesian fist.
It is a period which brings shame to stronger Pacific countries, notably Australia and New Zealand.
A Crickey! piece by Jeff Sparrow exposed the West's media hypocrisy over Suharto and contrasted coverage with Saddam Hussein.
Meanwhile, AUT Journalism has a couple of student journos on the ground in Indonesia filing actuality. Dylan Quinnell reported on how Suharto's death split opinions and the media. Read his story and see his pix - a street scene outside Suharto's house.
Posted by café pacific at 1:55 AM