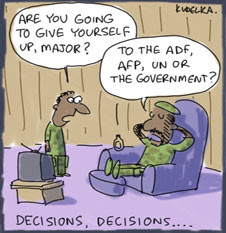 A leaked videotape featuring fugitive rebel leader Alfredo Reinado, a former military police major and something of a cult figure with some reactionaries, blaming prime minister Xanana Gusmão as the person responsible for the crisis that engulfed East Timor in 2006. It has featured in the media and now Fretilin has called a media conference to discuss the contents of the tape. A statement by Francisco Guterres LuOlo, president of Fretilin, on 8 January 2008 said:

FRETILIN has called this press conference today to make public to the People of Timor-Leste, the Maubere people, that on the 31st of December 2007, we wrote to the President of the Republic and other institutions of our State regarding the allegations made by Mr Alfredo Reinado in a video recording that came into our possession last week, which has serious ramifications for our nation's stability and peace, and which will impact on our public institutions.
In that video recording that has been widely distributed by unidentified persons, Mr Alfredo Reinado accuses Mr Xanana Gusmão as the person responsible for the crisis that engulfed our nation in 2006. I am sure that all of us here today have heard or seen the said video recording, or have perhaps read about it in a newspaper.
When we viewed a copy of this recording that we obtained from the media, FRETILIN became extremely concerned with the impact that it would have on peace and stability in our country, as the statements made by Mr Alfredo Reinado may well lead to further public panic amongst our people already traumatized by similar statements from last year's crisis, and there may well be a surge in the number of currently internally displaced persons. We are concerned that the statements by Mr Reinado are aimed at continuing to divide our people and create further serious instability in our country.
Posted by café pacific at 8:30 PM