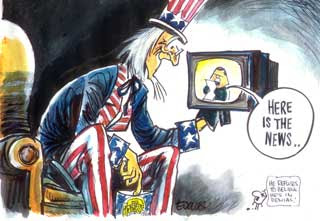 An update from Bill Rosenberg about his media ownership in New Zealand monitoring file (cartoon by Malcolm Evans from a previous PJR cover):
A revised version of my paper "News media ownership in New Zealand" is now available, which includes updates to the 15 October 2007 version, including some suggestions from readers (many thanks). The changes are outlined below.
It is available either by clicking the above link or going to the CAFCA web site. I am unlikely to release another update for at least 2-3 months. If you do not wish to be notified of future updates, please reply to this message and I will remove you from my list (with no offence taken!).
The changes from the 15 October version:

For those needing the URL, it is as follows. As I release updates, I
will simply replace the document under the same name as the latest
version - mediaown.pdf - so links do not need to be updated.