Kiwi journo team in Jakarta on the ball 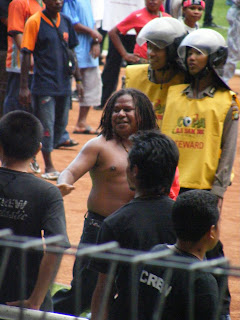 Good to hear from the Kiwi journo team on a Jakarta practicum this week - Aroha and Dylan (AUT) and Will (Massey). They've finished the course part and now move into the internships next week - Aroha is going to Metro TV, Dylan joins TVRI and Will gets his start with Reuters. They are on the programme along with 20-plus Oz journo students or graduates.
We should get a feed of stories from them - look for these at the Pacific Media Centre. Aroha's piece on ex-president Suharto's desperately clinging to life is here. And Dylan has a few bloggy bits here. Dylan was blown away by a national soccer semifinal between a Jakarta team and one from colonised Papua. Here are his thoughts on the experience:
The soccer semifinal was crazy, riot police everywhere and when the Jakarta supporters realised they were going to lose 3-2 things got nasty. A group who were sitting above the Papuan supporters started ripping up the bench seats and chucking them at the people below. Riot police charged up and restored order but after that plastic water filled bottles were flying and most of the Papuans broke through a fence at the bottom and milled beside the field flanked by police.
After the game, most were put of buses and escorted from the stadium to stop more fights. Two guys were set upon with metal pipes outside our hotel but got away with minor injuries, not a nice situation. My photo shows one of the Papuans celebrating on the field with some of the ever present police behind. I would hazard a guess that political tensions increased the tension as there seemed to be no love lost. A second group of supporters waiting for a later game also started bottling the Papauan, who charged up into their section with sticks forcing them to flee into ours, before I headed onto the field.
I am currently thinking of staying on for a while afterwards and working here to do a few independent stories.