THIS PICTURE must be one of the last of “Papa” Ron Crocombe, who died suddenly on Friday while on a shuttle taking him to Auckland International Airport on his return to the Cook Islands. Café Pacific’s David Robie had been with him just a couple of days earlier in Tonga for the induction ceremony of six international fellows (Ron and David included) at ‘Atenisi University. 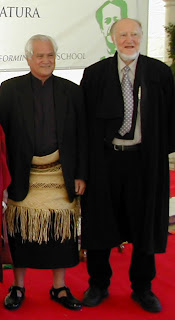 One of the fathers of Pacific regionalism, Ron Crocombe (top: on far right, next to Tongan prime minister Dr Feteli Sevele), had been emeritus professor of Pacific studies at the University of the South Pacific in Fiji since his "retirement". After working in Papua New Guinea for seven years where he ran the New Guinea Research Unit, he became the founder of the Institute of the Pacific Studies at USP and was director for more than two decades. Sadly, the IPS and his legacy have virtually disappeared in restructuring at USP.

In his so-called retirement, Professor Crocombe, aged almost 80, was also a great achiever and continued to work tirelessly for the South Pacific region as an inspiration, critical thinker, adviser to governments and politicians, mentor to Pacific writers and researchers, and contributor to developing a strong regional civil society. While at ‘Atenisi, he spoke strongly of the achievements of founding Professor Futa Helu and 40 years of education at the university and institute. Among a collection of books he donated to the university was an original edition of Mariner’s 1817 classic Tonga Islands. (William Mariner was a teenager on board the English privateer Port Au Prince, captured by Tongan warriors in the Ha'apai island group. He was one of the few who survived and after living in Tonga for four years wrote a detailed account of his experiences).

Professor Crocombe was a frequent critic of Australian and New Zealand policies in the region and about hypocrisy over aid (and Fiji’s disproportionate influence on regionalism). For example, he made these comments about the Pacific Plan in one ABC Radio interview:

In recent years, Professor Crocombe had worked towards benefits from greater cooperation with Asia, particularly China, in the region. He advocated greater awareness and preparation in Pacific countries for the “Asian century”. Among his recent works for the IPS were publication in 2007 of the 623-page tome about the “spectacular transition” underway in the Pacific detailing a half century of growing Asian involvement in the Pacific and declining Western influence. Entitled Asia in the Pacific Islands: Replacing the West, the latter book notes:

Asia is already more important than Western sources in some dimensions (eg. exports and investments) and the relative importance is increasing steadily. However, few in the Islands are preparing for the change. It has been clear for over 30 years that Pacific curricula need to emphasise Asia more, and that many more Island students, media and diplomats sent abroad for study should spend more time in Asia – especially its Pacific coast nations, which they will need to understand and deal with. One hopes too that more Asians will take a positive interest in the islands.

Yes - all at South Pacific Books mourn deeply the loss of our dear friend and mentor. Ron was incredibly supportive of us. Always carrying books around the globe for us. Nothing was ever too much trouble. Such energy and humanity. We spent hours together just a few days ago at our new shop - of course Ron brought books from Rarotonga - and took away with him a big pile... needless to say at least half of them were authored by Ron himself. As i look around the shelves his name flicks past so many times. What a legacy. Even the day before his death he talked to me as usual from his hotel at Auckland Aiport... once again with books from Tonga... business as ususal... lovely conversation and his usual enthusisam and energy. We will miss him incredibly.

Dear David,
Read your fab euology for Papa Crocombe.Your words continue to bless us with your affections and memories that honour a colleague and pioneer. Spent the weekend with the most hardcase poets in my life my mokos what they taught me is its never to late to write and express Aroha.
Peace
Mua

This is a great response from Brij (posted below) in his last reponse to me (and Bob) after a couple of e-mails on Ron. I shared the entry on your blogs on Ron and was first alerted about Ron's passing by Vijay and Morgan.

What a shock to find that dear Ron has passed away, especially after seeing him in Tonga just a few days ago.

Our condolences to his family, friends and may colleague.

His untimely death has made our time with him at Futa’s 75th birthday even more special.

My condolences go out to the family for the loss of a great Pasifika man. I took him to his hotel in Nuku'alofa on Wednesday evening, the night before he flew out to Nuku'alofa. He signed copies of 2 of his latest books, and gave them to me. We had a very stimulating talk on "the future". I drove him back to 'Atenisi as he wanted to watch the film on Futa. We will all miss him, his mana as an academic, his enduring friendliness, and tremendous generosity in sharing his knowledge and wisdom.

Malo, Ron. You are gone in body, but your spirit lives on among us.

Office of the Prime Minister said...

He said the late Professor’s writings and promotion of Pacific Islanders in converting their thoughts and experiences into books leaves behind a legacy that will be indelible in Pacific history.

‘’As a young man, the late Professor Ron Crocombe lived and worked in Papua New Guinea. Throughout his career he continually visited our country before and after Independence. As the Founding Director of the Institute of Pacific Studies at the University of South Pacific, Suva, until his retirement, he mentored many Pacific Islanders in writing about themselves and the world around them,’’ Sir Michael recalled.

He said, ‘’Even though he had retired, he was back in PNG lending his support to the revival of this prestigious Seminar. And he continued after the Seminar to be one of the editors of the papers that were presented for publication.

‘’Papua New Guinea and the Pacific in general are saddened by the passing of a great Pacific Islander.

‘’On behalf of the people and Government of Papua New Guinea, I offer our sincere condolences to Marjorie Tuainekore and the children, the families and people of the Cook Islands and the families in New Zealand, his birth place, for the passing of a Pacific icon in the field of academia.

‘’May the memory and legacy of Ron Crocombe live on!’’