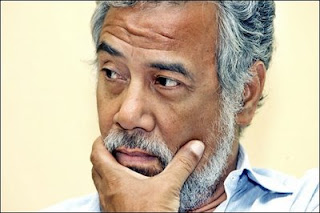 CALLS ARE mounting for East Timorese resistance hero and founding president Xanana Gusmão to resign as prime minister amid fresh allegations of corruption, this time involving a lucrative contract with his daughter Zenilda as a beneficiary. The Sydney Morning Herald’s Jakarta correspondent, Tom Allard, reports that if these latest allegations are proven, they could be a major problem for Gusmão, "who has staked his reputation on cleaning up East Timor’s bureaucracy and its tender system”.

The SMH cited a a spokeswoman for the Australian Department of Foreign Affairs and Trade saying the Canberra government “took allegations of corruption seriously and was working closely with the East Timorese government to increase accountability”. The unnamed spokeswoman said the Australian aid programme to Timor-Leste was carefully monitored to “prevent and detect fraud”. The Fretilin oppositionhas spearheaded these allegations and is already channelling protests. According to Allard, citing documents obtained by Fretilin:

Mr Gusmão awarded a $US3.5 million ($4.4 million) contract for rice imports to Prima Foods, a company Fretilin says is partly owned by his daughter, Zenilda. The contract was awarded under a $US45 million government program to import basic foodstuffs.

Radio Australia has also confirmed that the wife of another senior minister has profited from government tenders.

The country's procurement law bans "agents of the administration", politicians and bureaucrats from awarding government contracts to businesses associated with close family members.

"It's absolutely a strong indication of corruption, he has violated Timor Law, and before it goes to the courts the prime minister should resign," Mr Bano said.

However, a spokeswoman for the government confirmed to Radio Australia that Zenilda Gusmão was a shareholder of Prima Food.

President José Ramos Horta has distanced himself from a scandal, involving the country's Prime Minister. He says it is not his business to intervene.

The administration awarded a $US400 million contract to a Chinese Government-owned company to build two powerplants without calling for open tenders. Under the deal,
East Timor will import expensive and highly polluting heavy oil, even though it is rich in natural gas.

The husband of the Justice Minister, Lucia Lobato, was reportedly awarded a lucrative contract to rebuild a prison and supply uniforms for guards. Lobato, who is responsible for the prison system, is suing the journalist who broke the story.

Resign or step-down (voluntarily) pending a thorough investigation. No conflicting interests in Governance of East Timor should be tolerated. We are all watching.