A date with the ghosts of Balibo 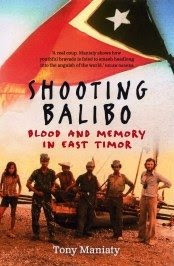 FORMER ABC journalist Tony Maniaty, now a senior journalism lecturer at the University of Technology, Sydney, has scored a coup with his new book on East Timor - Shooting Balibo. He covered the war in the self-declared independent former Portuguese colony in 1975 for ABC TV News and came under heavy shelling in Balibo. A few days later, five other journalists working for Australian media - who had ignored his warnings not to go to Balibo - were murdered by Indonesian soldiers in the dusty border town. The martyred journalists were Brian Peters, Gary Cunningham, Malcolm Rennie, Greg Shackleton and Anthony Stewart.

Maniaty was aged 26 during the war. Thirty-three years later, in his role as consultant to the forthcoming feature film Balibo about these gruesome Indonesian killings, Maniaty returned to Balibo for the first time.

Shooting Balibo is his memoir of going back to that traumatic event, and of how Timor has changed since. Together with the haunting experience of watching five young actors playing his murdered colleagues (and watching himself portrayed as a young reporter), Maniaty also conducted revealing interviews with some of Timor's key players, including President Ramos-Horta, about the events that led up to the Indonesian invasi

In the book, Maniaty joins the cast and crew of Balibo as they travel to the gutted shell of the burned house where his colleagues were killed a generation earlier. The book has already had an emotional and well-received launch in Timor. Maniaty reflects:

They say we've only got one war in us, and my days in Timor in 1975 were enough to teach me many things, not least that experience in the house of conflict is expanded, and that the exhilaration of war, once felt, can never be replicated in everyday life; that risk goes hand in hand with raw beauty; that life is never so intense as it is, or was, in that compression of life called war...