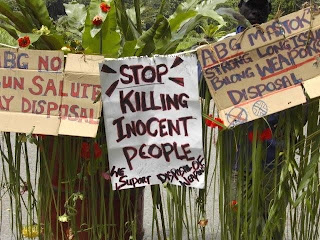 CONGRATULATIONS to Aloysius Laukai and the team at New Dawn FM in Bougainville. They have become the first Pacific group to win the global Communication and Social Change Award, hosted and sponsored by the University of Queensland. The "brave and pioneering" community radio station was charged with the mission in 2008 of helping rebuild the shattered province after a decade-long civil war with estimates of up to 20,000 people dying in the conflict or related health and poverty issues because of the blockade imposed by Papua New Guinea. An estimated 40,000 people were internal refugees at the height of the war.

UQ’s head of the School of Journalism and Communication, Prof Michael Bromley, says 19 entries were received for the award, which recognises and honours outstanding contributions to the theory and practice of communication and social change. Café Pacific understands at least two other nominations were from the Pacific – femLINK Pacific in Fiji and the Pacific Media Centre in New Zealand. Nominations also came from 11 other countries - Bangladesh, Burundi, Canada, Congo, India, Nigeria, Philippines, Rwanda, Sierra Leone, Uganda and the US.

New Dawn’s chairman and manager Aloysius Laukai was delighted with the station's recognition and he will fly to Brisbane to receive the award next month. The jury for the award included ABC foreign editor Peter Cave, AusAID Deputy Director General Annmaree O'Keeffe and former secretary-general of the Asia-Pacific Broadcasting Union Hugh Leonard. They were joined by chair Prof Ken Wiltshire and three other senior Queensland University academics.

The award constitutes a commemorative plaque and a cash prize of $2500. The jury also awarded a special meritorious commendation for Communication and Social Change Award to Indian graphic designer and artist Lakshmi Murthy for her “innovative and ground-breaking use of graphic design to promote communication and social change”. She will receive A$1500 and a plaque.

New Dawn FM was established after early planning in 2000 with the assistance of several Australians who had worked in broadcasting in PNG, including Keith Jackson AM, Phil Charley OAM and Prof Martin Hadlow, now director of the Centre for Communication and Social Change at UQ.

The radio was dubbed New Dawn FM to “mark our optimism about the future of Bougainville following a terrible civil war that left countless thousands of people dead, injured or internally displaced”, explains Laukai on the radio website:

We believed the project would contribute to establishing a public sphere of community discourse, enabling discussion and giving a voice to a community dispossessed by civil insurrection and seeking to rebuild a democratic society.

The [planning] talk continued and reached a lunch table in Sydney, Australia, where our board member Carolus Ketsimur met his old Papua New Guinea broadcasting buddies Phil Charley, OAM, and Keith Jackson, AM. They sought the assistance of Martin Hadlow of UQ, himself formerly a radio station manager in PNG and a senior UNESCO executive.

Together we developed a concept that saw UNESCO and the German government provide funds for studio equipment and a transmitter. After a number of false starts, we finally started testing the station in April 2008. Then, at the end of June, our transmitter was destroyed when strong winds damaged the telescopic mast. We paid for another and a standby transmitter and went back on air in November 2008.

We are now on air with a transmitter power of 300w. Since our establishment we have covered the Bougainville presidential byelection and also the celebrations of the inauguration of the second Autonomous Bougainville Government. This was done in Arawa in Central Bougainville and we covered it live for listeners in the north.

Pictured: A pro-peace protest in Bougainville calling for a speeding up of the destruction of guns. Photo: New Dawn FM.