FIJI WATER has come out with a spluttering response to Mother Jones’ investigative story condemning the South Pacific “pure water” company as creating a marketing illusion in the United States that is far from reality. In a nutshell, freelancer Anna Lenzer’s story given splash cover treatment by the magazine proclaims “the spin” as “pure”, “fancied by celebs (including President Obama)”, “every drop is green”. “untouched by man” and “living water” is flawed.

The “facts”, claims MoJo, are that Fiji Water produces “twice the plastic”, puts “lipstick on the junta”, is “diesel-powered”, “hides its profits in tax havens” and “locals drink dirty water”.

Lenzer’s article, "Fiji water: Spin the bottle", proclaims: Obama sips it. Paris Hilton loves it. Mary J. Blige won't sing without it. How did a plastic water bottle, imported from a military dictatorship thousands of miles away, become the epitome of cool?

The article has riled executives of Fiji Water, a company that reputedly employs 350 people in a rural part of the Pacific country. Company spokesman Rob Six replied on MoJo’s Fiji Green Blog:

We strongly disagree with the author’s premise that because we are in business in Fiji somehow that legitimises a military dictatorship. We bought Fiji Water in November 2004, when Fiji was governed by a democratically elected government. We cannot and will not speak for the government, but we will not back down from our commitment to the people, development, and communities of Fiji.

We consider Fiji our home and as such, we have dramatically increased our investment and resources over the past five years to play a valuable role in the advancement of Fiji.

It is true that Fiji is a poor country, but we believe that the private sector has a critical role to play to address the under served areas of Fiji’s development, with special attention to economic opportunities, health, education, water and sanitation. 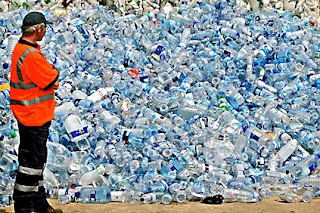 MoJo co-editor Clara Jeffery replied through comments by Lenzer, saying Six didn’t respond to key questions raised in the MoJo article: from the polluting background of Fiji Water’s owners past and present, to the company’s decision to funnel assets through tax havens, to its silence on the alleged human rights abuses of the Fijian government. Lenzer's piece "doesn’t argue that Fiji Water actively props up the regime, but that its silence amounts to acquiescence. In contrast to the progressive image projected by the company in the US":

The regime clearly benefits from the company's global branding campaign characterising Fiji as a "paradise" where there is "no word for stress." Fiji's tourism agencies use Fiji Water as props in their promotional campaigns, and the company itself has publicised pictures of President Obama drinking Fiji Water. This is a point repeatedly made by international observers, including a UN official who in a recent commentary (titled "Why Obama should stop drinking Fiji water”) called for sanctions on Fiji, and singled out Fiji Water as the one company with enough leverage to force the junta to budge.

Yet the most pointed criticism the company has made of the regime was when it opposed a tax as "draconian;" it has never used language like that to refer to the junta's human rights abuses.

It’s worth remembering that there aren’t very many countries ruled by military juntas today, and Americans prefer not to do business with those that are. We don't import Burma Water or Libya Water.

Lenzer herself pointed out:

I did contact Fiji Water before my trip, and [Rob] Six mentioned that the company "takes journalists to Fiji"; I didn't follow up about joining such a junket. Despite news reports showing that Fiji wouldn’t cooperate with journalists who went there independently, I chose to do so and visited the factory on a public tour. I had planned to speak to Fiji Water’s local representatives, and to visit the surrounding villages, afterward. But it was at that point that I was arrested by Fijian police, interrogated about my plans to write about Fiji Water, and threatened with imprisonment and rape.

After that incident, personnel at the US Embassy strongly encouraged me not to visit the villages. I did discuss my trip to the islands with Six after I returned, and had extensive correspondence with him on numerous questions, many of which he has not addressed to this day, including:

- Why won't the company disclose the total amount of money that Fiji Water spends on its charity work? Do its charitable contributions come close to matching the 30 percent corporate tax rate it would be paying had it not been granted a tax holiday in Fiji since 1995?

- Will Fiji Water owners Lynda and Stewart Resnick, who in the company’s PR materials contrast our tap water supply with the “living water” found in their bottles, disclose the full volume of pesticides that their farming and flower companies use every year? Could limiting those inputs create better water here at home?

- Fiji touts its commitments to lighten its plastic bottle (which is twice as heavy as many competitors’) by 20 percent next year, to offset its carbon emissions by 120 percent, and to restore environmentally sensitive areas in Fiji, but its public statements never acknowledge that these projects are, in many cases, still on the drawing board or in the negotiating stages. Why?

Meanwhile, it's good to see a despatch posted at Pacific Media Centre from AUT postgrad journalist Keira Stephenson, who is on internship with the Philippine Star, about Manila communities' daily struggle for water.