Burmese peace laureate back under house arrest for elections 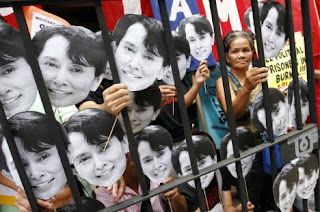 BURMESE Nobel peace laureate Aung San Suu Kyi has been sentenced to 18 more months detention for "violating her house arrest" by allowing an uninvited American into her home. The 64-year-old opposition leader has spent 14 of the last 20 years in detention, mostly under house arrest, and the extension ensures her absence from the political scene when the ruling junta stages elections next year.

According to a report by the Burmese independent Mizzima news service:

Home affairs Minister Lieutenant General Maung Oo, the minister of home affairs, arrived in court and read out an order signed by the head of the military junta, Senior General Than Shwe, dated 10 August.

The order stated that if the court convicted Aung San Suu Kyi, half of the sentence should be commuted. It added that she could be freed after serving the sentence if she showed good behaviour. The order explained that her sentence had been commuted because she is the daughter of General Aung San, the architect of Burma's independence from the British colonial
authorities.

"The verdict against Aung San Suu Kyi is that she will be taken back to her house and kept under restrictions for 18 months, after which if she shows good behavior she could be freed," her lawyer, Nyan Win, told Mizzima. He said she wiould be kept under restrictions but could write a
request asking for certain rights, including receiving guests. She would also be allowed to watch television and read newspapers.

Similarly, her two live-in political party members, Khin Khin Win and Win Ma Ma, who were also sentenced to three years in prison with hard labour, had their terms reduced to an 18-month suspended sentence each and would be sent back along with Aung San Suu Kyi to her home.

John William Yettaw, the American man who swam across a lake to reach Aung San Suu Kyi's house, however, was sentenced to seven years' imprisonment with hard labour. The court said that Yettaw's sentence relates to abetting Aung San Suu Kyi in violating the terms of her house arrest and other charges including violation of immigration laws.

In an attempt at transparency, the Burmese military junta allowed diplomats and journalists to be present at the court proceedings in Rangoon's Insein prison, where the trial of Aung San Suu Kyi and her three co-defendants was being held.

A Rangoon-based diplomat told Mizzima that several foreign missions based in Rangoon, along with journalists, were given permission to be inside the court room.