Running out of patience with the Murdoch media camp 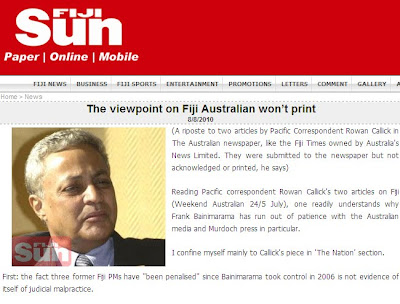 REPUBLISHED from the Fiji Sun. Food for thought, especially when the Sun was singled out by The Australian. News Ltd's own title, The Fiji Times, also gave "saturation coverage" to the charges. It carried a half page photo. FT is hardly a pro-government newspaper. "Callick is being rather selective," as a prominent media watcher from Fiji has indicated to Café Pacific:

The viewpoint on Fiji The Australian won't print

A riposte to two articles by Pacific correspondent Rowan Callick in The Australian newspaper, like the Fiji Times owned by Australia's News Limited. They were submitted to the newspaper [by an academic with specialist knowledge on Fiji] but not acknowledged or printed, he says.

Reading Pacific correspondent Rowan Callick's two articles on Fiji (Weekend Australian, 24/5/ July), one readily understands why Frank Bainimarama has run out of patience with the Australian media and Murdoch press in particular.

I confine myself mainly to Callick's piece in "The Nation" section.

First: the fact three former Fiji PMs have "been penalised" since Bainimarama took control in 2006 is not evidence of itself of judicial malpractice.

In his other article, in the "Focus" section, Callick refers to a general history of poor leadership in the Pacific.

In which case, is it not at least possible that three former PM's of Fiji do have possibly valid allegations to answer for?

For most here, including myself, it came somewhat unexpectedly.

For though it was the front page story in the pro-Bainimarama Sun newspaper, it was reported without frills.

(Editor's note: Mr Chaudhry denied all the charges against him and is contesting them in court).

That it had "obvious political implications". That Foreign Affairs would "be watching this case closely". News? More to the point there's no allowance here for the possibility that Chaudhry might just have something to answer for.

Nothing but the bleeding obvious, either, in Foreign Affairs saying the case held out "political implications".

Not allowing for the fact, perhaps, just perhaps, however remote, that these very serious allegations may have already had "political implications" for governance and the rule-of-law in Fiji.

Fourth: Callick cites Amnesty International for the government's dismissal of judges and magistrates. Fair enough. Such removal is of concern. But so too is how sections of the judiciary, during former P.M. Qarase's tenure, succumbed to political pressures. Most notably, by releasing early from goal, men sentenced for conspiring with George Speight (and others unnamed or involved in politics) in the 2000 coup.

No mention was made of either of those in the police in 2000, along with mutinous army units, who made the coup possible. Nor any reference to those others in the military who later almost succeeded in assassinating Bainimarama for what his clean-up might reveal.

The military takeover of any elected government always falls somewhere between "unfortunate" and "disastrous". But when elections are based not on the principle of one-person-one-vote, but on communal grounds, and one of those communities - itaukei or ethnic Fijian - has superior numbers who are then promised favoured treatment, and are incited to bully, burn, and expel Indians and their property then, I suggest, the usurpation of "democracy" ranks at the 'unfortunate' end of the spectrum.

Fifth: Callick says the Fiji government has stopped Rabuka's pension to shut him up.

He doesn't mention that it revoked that decision and that Rabuka has been publicly contrite and supportive of Bainimarama.

Sixth: We are told Chaudhry describes Bainimarama as "autocratic and dictatorial".

There's no mention of the fact that some people in Fiji (rightly or wrongly) condemn Chaudhry for his own arrogant and insensitive, some would say self-serving, leadership.

First as a unionist parliamentarian and then as Prime Minister: the kind of behaviour unhelpful to the creation of civil society.

Callick also forgets that Fiji's universally esteemed first Prime Minister, the late Ratu Sir Kamisese Mara, sometimes spoke of the need for "benign dictatorship" in Fiji in the post-independence years. It was deemed compatible with traditional authority and useful to the creation of his own brand of multiculturalism. I don't recall any foreign powers objecting then.

As best I can judge, and it is impossible to be sure, right now most Fijians (the government, by the way, recently declared an end to ethnic labels: all its citizens are "Fijians") regard Bainimarama not as a malign dictator, the kind Canberra and Wellington would have us see. Rather they see him as the right man in the right place, a harbinger of hope.

Seventh: Callick is right to say Bainimarama's recent "Engaging Fiji" meeting, in Fiji, with the Melanesian Spearhead Group - Plus, was a "public relations coup". But it wasn't seen as "tumultuous" here.

Furthermore, it was arguably a victory not just for Bainimarama personally, or even the MSG but also for that rather - forgotten concept - "the Pacific Way", minus of course Samoa, Niue and the Cook Islands which are desperately dependent on New Zealand.

Like Bainimarama's Fiji, the "Pacific Way" is imperfect but until politicos, foreign affairs journalists, diplomats, and policy advisors get their heads into the history and lived-reality of culture in the South Pacific, folk in Australia and NZ will go on being subject to the myopia and entrenched views their professions seem to involve.

They would bring a return of the political and economic opportunists, impelled to stir up ethnic fears via the bogey and lies of problematic "race".

The result would be social mayhem on a greater scale than has yet been seen.

Exodus and claims to asylum would follow. It is a scenario that the two Tasman neighbours seem intent on ignoring. Exactly why is another matter.

The duty of any state, Michael White wrote recently in The Guardian Weekly (18 June 2010), is first to protect its people from hostile foreign powers, and second to ensure internal social order: the sort of stability, harmony, and peace-of-mind most in Fiji are presently grateful for.

Dr Christopher Griffin describes himself as a student of Fiji society for 35 years. He originally taught sociology at the University of the South Pacific, Suva, and till recently social anthropology at Edith Cowan University in Australia, where he is today an Honorary Senior Fellow.

The viewpoint on Fiji the Australian won't print
Posted by café pacific at 5:35 PM

What a load of waffling rubbish. No wonder so many tertiary institutions are struggling and are cleaning out their soft subjects and sheltered workshop academics. Total trash!