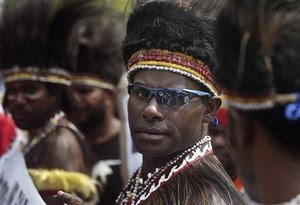 THE NAKED and handcuffed body of a murdered Papuan journalist has incensed human rights activists and media freedom activists alike. The discovery of the body dumped in a river comes just days after the Obama administration has been widely condemned over the decision to resume engagement with Indonesia’s notorious Kopassus special forces. Kopassus has a bloody record throughout the republic, but especially in the former repressed "colony" of East Timor and in the annexed territory of West Papua.

The East Timor and Indonesia Action Network (ETAN) has been among those groups at the forefront of protest against the Indonesian red-berets: "Slipping back into bed with Kopassus is a betrayal of the brutal unit's many victims in Timor-Leste, West Papua and throughout Indonesia. It will lead to more people to suffer abuses," says John M. Miller, national coordinator of the US-based ETAN.

"Working with Kopassus, which remain unrepentant about its long history of terrorising civilians, will undermine efforts to achieve justice and accountability for human rights crimes in Indonesia and Timor-Leste (East Timor)."

In an abridged translation by the Indonesian human rights movement Tapol of an article published by the Jayapura newspaper Bintang Papua, the Indonesian government has been urged to pass a law to protect journalists and civil rights activists.

Missing stringer
A Pacific Media Watch despatch has summarised the Bintang Papua article about the tortured Merauke environmental TV journalist who had been reportedly investigating alleged military corruption. He had been a stringer for the national television broadcaster Anteve and had been missing for two days:

The death of Ardiansyah Matra'is , known to his friends as Ardhi, 31 years old, whose badly wounded body was discovered on the banks of Maro River, is deeply disturbing and is seen as a threat to other media workers and civil society activists.

The Regional Representative Council - DPD - and the Anti-Corruption Institute, has called on the Indonesian government to immediately adopt a law guaranteeing protection for activists and media workers and called on the security forces to investigate this case, to find out who was behind this murder of the Merauke TV journalist.

Saly Maskat, speaking on behalf of the institute, said that democracy in Papua was now dead because there was no guarantee of safety for journalists who were seeking the truth.

It is ironic that shortly before his death, Ardhi and several of his colleagues had received SMS death threats.

The government has for too long delayed adopting a law providing protection for activists and media workers. Only recently, an ICW activist was beaten up by unknown persons while carrying out an investigation into several cases involving government officials.

Saly said that colleagues have frequently been threatened by unknown persons while investigating cases concerning Papuan officials similar to the cases in Merauke.

Such incidents, which have also occurred in Bali, have had a serious impact on our activities, he said, as well as on our organisation.

People feel constrained about continuing with their activities in the media if there are no legally guaranteed safeguards from the government.

He also called on the police to thoroughly investigate these incidents and find out who was behind the ghastly murder of the journalist. "This is essential to provide journalists with a sense of security in the pursuit of their journalistic activities."

West Papuan activists welcome a statement from the Pacific Islands Forum Secretary-General, Tuiloma Nerom Slade, highlighting a forum theme to “protect the most vulnerable communities within the Pacific”.

A media release from West Papua National Coalition for Liberation (WPNCL) spokesperson Rex Rumakiek said it was the sincere hope of the West Papuan people - "who continue to suffer under Indonesian rule - that the forum will not keep ignoring the genocide and will actively address the truely vulnerable communities in West Papua".

The WPNCL and other NGO groups claim more than 100,000 people have died during the past 40 years of Indonesian colonial rule.

Pictured: Papuans in tribal dress protest for independence outside the US Embassy in Jakarta in 2007. Photo: Irwin Fedriansyah, agencies

"in the former repressed colony of East Timor and in West Papua" - So is West Papua a colony or not?