AS 120,000 people were ordered to stay in indoors and a further 70,000 evacuated from the 30km danger zone in northern Japan around stricken Fukushima Daiichi nuclear power station today, thoughts turned to the 50 volunteers who will probably pay a high price for trying to save the country from an even greater catastrophe. Their sacrifice follows the devastating 9.0 magnitude earthquake 120km off the east coast of Honshu on Friday, followed by an apocalyptic tsunami that swept an estimated 6500 people to their deaths. The technicians, soldiers and workers have been described by two journalists of The New York Times as the "faceless fifty". They remain unnamed. One newspaper branded them the "atomic samurai". However, just as this item was being published, it has been reported that even this group has now been ordered out of the danger zone after new radiation spikes. They later returned.

A small crew of technicians, braving radiation and fire, became the only people remaining at the Fukushima Daiichi nuclear power station on Tuesday — and perhaps Japan’s last chance of preventing a broader nuclear catastrophe.

They crawl through labyrinths of equipment in utter darkness pierced only by their flashlights, listening for periodic explosions as hydrogen gas escaping from crippled reactors ignites on contact with air.

They breathe through uncomfortable respirators or carry heavy oxygen tanks on their backs. They wear white, full-body jumpsuits with snug-fitting hoods that provide scant protection from the invisible radiation sleeting through their bodies.

They are the faceless 50, the unnamed operators who stayed behind. They have volunteered, or been assigned, to pump seawater on dangerously exposed nuclear fuel, already thought to be partly melting and spewing radioactive material, to prevent full meltdowns that could throw thousands of tons of radioactive dust high into the air and imperil millions of their compatriots.

The company continued to fight problems in several reactors on Wednesday, including a fire at the plant.

The workers are being asked to make escalating — and perhaps existential — sacrifices that so far are being only implicitly acknowledged: Japan’s Health Ministry said Tuesday that it was raising the legal limit on the amount of radiation exposure to which each worker could be exposed, to 250 millisieverts from 100 millisieverts, five times the maximum exposure permitted for nuclear plant workers in the United S 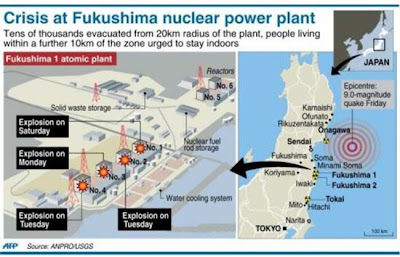