WAS there any real justification in the devastating intervention in Libya - initially French, British and US-led and now with NATO driving? Is there really a moral case for this "no-fly zone" sham? Is it really all about saving civilian lives, or blatantly ensuring a regime change with control of oil once again the bottom line? There is a long list of countries that probably deserved foreign intervention in recent years, but were simply ignored with fossil fuels not being a critical factor: Somalia and international piracy, Ivory Coast, Sudan and Zimbabwe just to name a few. All left in the dustbin of Western hypocrisy. Here are some contrasting views from two columnists - Gordon Campbell on Scoop and the London Daily Mirror's Tony Parsons. Campbell contrasts the Libyan and Iraqi scenarios, defending the attack on Libya while condemning the invasion of Iraq, but Parsons brands the British involvement in Libya as simply "insane". Campbell writes:

Was the intervention in Libya justified – and if so, does that mean the invasion of Iraq in 2003 was justified? The conditions laid down by the French for their participation in enforcing a no-fly zone over Libyan air space go some way to answering those questions. Before they would join in any military action in Libya, the French were asking for (a) a clear UN resolution for the intervention(b) it had to be a UN operation, not one led by NATO (c) there would have to be some Arab involvement in the force, however token and (d) there would have to be a direct request and support for that intervention from a significant part of the civilian population. 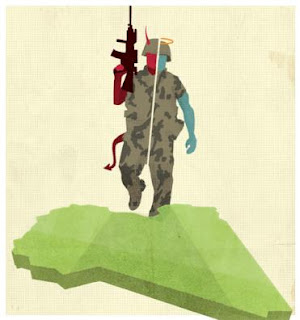 France’s stance is relevant not simply because it is one of the three main partners in the military force now attacking Libya. In 2003, it had been the most articulate opponent of the US invasion of Iraq, for reasons set out in this speech to the UN in 2003 by its then Foreign Minister Dominique de Villepin. All the conditions France have asked for in 2011 stand in striking contrast to the Iraq situation – which had no valid UN mandate, was a unilateral American-led adventure, had no Arab participation, and was in response to no direct threat to the people of Iraq, unlike the direct threat being posed to the people of Benghazi.

The immediacy of the murderous threat that Colonel Gaddafi posed to the civilian populations in the Libyan towns and cities that contain the rebels mark the main difference from the situation in Iraq. Without that immediate threat, the rationale for military action to topple the tyrant in Libya sounds almost identical to the Bush administration’s justification for intervening to topple the tyrant in Iraq.

Parsons in the Mirror says that if British prime minister David Cameron "had to send his kids to war, we'd all live in peace". In his latest column, he wrote:

It costs £900,000 for every Tomahawk missile ­– I am so glad we didn’t waste all that money on something stupid.

Oh, what a stupid war. Oh, what a dumb Britain. Stark raving mad – a country with empty pockets starting another open-ended, multi-billion pound conflict when we haven’t even finished the last one.

Are we insane? Have we learned nothing?

A country that can’t afford to police its own streets acting as though it can police the world. A country that is cutting back on military spending sending its ­undermanned, ­overstretched forces off to fight some more.

A country that can’t take care of its old people taking on the burden of caring for the oppressed people of Libya. A country that is currently closing down day centres for disabled children deciding it can afford another conflict that will waste millions every single day.

Barmy. Yet somehow so easy to understand. Thatcher, Blair and now Cameron – they all found it impossible to ignore the ­seductive call of war.

How much more satisfying it must be to confront the likes of General Galtieri, Saddam Hussein and Colonel Gaddafi than to deal with the problems of rising unemployment, soaring inflation, failing schools, housing ­shortages, a stagnant economy and all the rest.

But Parsons reckons that Thatcher had at least an achievable - and winable - goal. And he is decidedly nervous about a crop of "soft" politicians with little appreciation of the devastation of war; who can decide so casually on a warmongering path.

As I have noted before, it is terminally dangerous to have an army, navy and air force commanded by politicians who have never heard a shot fired in anger.