Memo to PINA – get your Vanuatu facts right 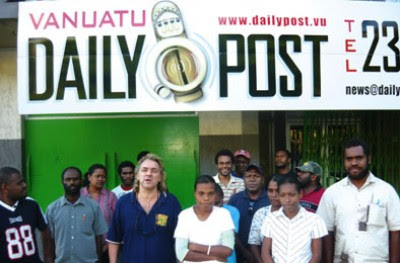 SO PINA finally came to the party, after days of Pacific journos asking around the region’s traps why hasn’t the main media organisation taken up the cudgels of media freedom? Yet again? PINA finally acted four days after the March 4 brutal political attack and assault on Vanuatu Daily Post publisher Marc Neil-Jones. The publisher plans to take a private prosecution against Public Utilities Minister Harry Iauko and the “gang of eight” henchmen, who were allegedly led by the politician in the attack, if the police fail to act.

Current PINA (Pacific Islands News Association) president Moses Stevens is also from Vanuatu, but Stevens and Neil-Jones have been feuding for years. PINA should have been at the forefront of the Pacific protests. Instead, it wagged the tail.

Auckland-based Pacific Media Centre made a statement on Saturday as soon as the front page of the Daily Post had been sighted, branding the attack as “mindless brutality”, the Cook Islands-based Pacific Freedom Forum followed on Sunday with condemnation. Then followed the International Federation of

Journalists, Reporters Without Borders and Samoa-based Pasifika Media Association on Monday with Fiji-based PINA and the Media Asosiesen blong Vanuatu (MAV) bringing up the rear on Tuesday.

Even then there was a grudging sting in Stevens’ statement with a reference to alleged “biased reporting”. Here, Neil-Jones, holds PINA to account for its attempt at qualifying the seriousness of the attack.

THANKS TO PINA AND MAV

I have today sent the following email to Moses Stevens thanking him for his PINA statement of support. I have also thanked MAV for their support.

Much appreciated Moses. Despite our differences, this assault is an outrage and Iauko should be sacked. I thank you for PINA support despite us not being members currently.

One thing in relation to your press statement on Iauko's allegation of “bias” [in] reporting. The “news” he reacted to on Friday was Transparency International's weekly opinion column which is vetted by lawyers and based on their own investigations into corruption. It is an opinion piece based on fact and documentary evidence in their investigations, vetted by a qualified lawyer. Same as the two opinionated letters to the editor [published] on that same day voicing anger and irritation over Iauko's actions in suspending the Airports Vanuatu board. My article earlier in the week on him suspending the AV board did not need comment from him as I had a copy of his letter to the board suspending them and I spoke to two board members and the expat adviser who had been told not to come into the office, all of whom confirmed what had happened.

I was shown the letter from Iauko. I was asked to investigate the legality of it and this was where the news thrust was as Iauko as Minister of Public Utilities is only a 50 percent shareholder in Airports Vanuatu and the Minister of Finance has the other 50 percent. I received advice from our lawyers his action was illegal if he had not got the support of Moana Carcasses. I called Moana and he confirmed that he knew nothing about it, had not been contacted by Iauko before he sent letters out suspending the board over allegations of malpractice and that Iauko could not do anything without his support and that what he had done was not right.

News hook
That was the news hook. I had proof the letter had been sent without any approval from Carcasses.

I didn't need to contact Iauko as he couldn't deny it as I had the letter. It was not “bias” in any way and just because we write about a minister if we are basing the story on documentary evidence, eg Joe Ligo's official report on corruption in Lands while he was Director-General of Lands and had the power to get any file, document or staff he needed to do a thorough investigation for a report requested by the PM. He was the most senior civil servant in lands when he did the investigation and report, which is why it is so damaging. I simply quoted direct from the official report and raised questions on why tenders hadn't been followed that resulted in Kalsakau getting land without a tender for 1/10th of its value.

The government could have got vt50 million but they got next to nothing. I accept VBTC [Vanuatu Broadcasting and Television Corporation] would have to get “the other side” in order to put them in the best possible light as they are owned by government but we do not need to, provided ethics are followed and the news item is based on fact and not opinion. If Iauko had a problem with Transparency International's criticism of him, he should have taken it up with them or take them to court in the normal way.

You have in fact inferred that we were “biased” and have asked for more balanced reporting. This seems to be agreeing with the minister and you voicing your concerns. I have issues with that as the news on Iauko was perfectly good, followed standard journalism practice and was no excuse for him breaking the law and clearly breaching the Leadership Code.

Transparency International are a very well known NGO fighting corruption and Marie-Noelle Patterson has a huge reputation following her years as Ombudsman. I have no problem whatsoever with their opinions and we do not need permission from Iauko or his comment before we run the column or a letter to the editor. I hope you can see this Moses. 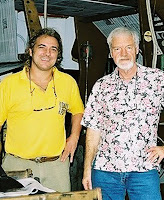 Assaulted a number of times
For your information, I have been assaulted a number of times and not twice as is being claimed. Correctional Services with Jackson Noel a couple of years ago which has not gone to court; Christopher Emele's family with two men and two women when I was breaking news he didn't like on the VMA; assault and rough handling by the police when I was thrown in jail for demanding an officer who assaulted Sam Taffo at a rugby game between [the Police team] and USP [University of the South Pacific] be suspended; assault by Morkin Steven when he was Minister of Finance at Trader Vics, when he reacted to news of his drunken behaviour and car crash was carried.

I let that go as he profusely apologised afterwards. I was also assaulted by one of Willie Jimmy’s boys over a news item on a court case involving Willie that was in the paper when I was having a friendly conversation with Willie Jimmy at Club Vanuatu. If you recall, Willie then called up and told me to keep him out of the story or he would come and smash the office up - and I refused.

Sabby Natongs sent his boys in when we broke the news of his private security force assisting the VMF. He reacted and tried to stop us printing and I was assaulted. He made me do a custom ceremony at Blacksands and invited VBTC radio and TV to cover my apology.

A year or two later, Natapei as PM admitted in Parliament that Tanna boys under Sabby were helping the VMF and now Sabby even advertises it. He used custom against me when the paper was accurate all along. There have been other minor instances in the 1990s I have forgotten about. Brain cells tend to go when you are hit around so much!

Health issues
At 53 years of age and an insulin dependent diabetic with health issues [and] not writing much, how bad does this look when Iauko needs to come in [and] bash an older guy with eight other people. If he was a real man he would come by himself as I am a lot older and weaker than him.

This clearly isn't right and my problem now is that I am highly cynical of whether the police and female Public Prosecutor will have the balls to take Iauko to court or not. They haven't with my past two assaults.

SIGN THE STOP VIOLENCE AGAINST JOURNALISTS IN THE PACIFIC PETITION