The Fiji junta, an insider on censorship and cross-cultural reporting 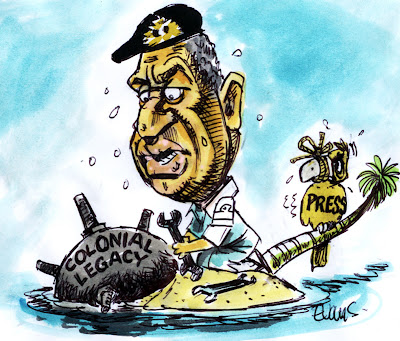 CENSORSHIP and the assault on human rights and freedom of expression in Fiji are featured in the latest edition of Pacific Journalism Review being launched at the NZ on Air diversity conference in New Zealand this week.

The 246-page edition, themed around "Diversity, identity and the media" issues, analyses the junta that has dealt an unprecedented "mortal blow" to press freedom in the South Pacific's most crucial country for regional cooperation.

The insider article, "Fragments from a Fiji coup diary", concludes that the New Zealand government needs to have secret contacts with the Suva regime to help investigate corruption and to help restore the country on the road towards democracy.

"This edition provides some challenging and fresh insights into diversity reporting in New Zealand, from Fiji to Asian stereotypes," says the managing editor, Associate Professor David Robie. "But it also celebrates some important achievements."

A strong review section includes books about the dark side of the pro-independence movement and media in Tonga, terrorism and e-policies in the Asia-Pacific region, conflict reporting, the making of a US president, editing and design in New Zealand and an extraordinary dissident Burmese political cartoonist.