Taking a breather - and giving Fiji a break 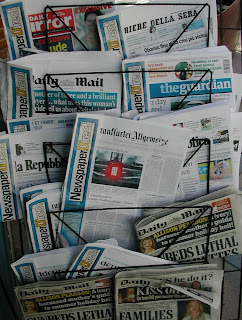 BACK from a month's sojourn in remote corners of Bora Bora, Papenoo and Maui and far busier moments in Alcatraz, Sausalito and Santa Monica, Café Pacific's publisher David Robie is refreshed and back in the thick of things. It was a delight being immersed in the stacks of quality newspapers (albeit endangered) in San Francisco after the paucity of a good press in NZ. Among the many colleagues encountered in the travels were Tagata Pasifika's Adrian Stevanon and Tagaloatele Osone Okesene on the ground in Pape'ete. Café Pacific missed the special Balibo film screening of the long-awaited story of the murder of six journalists in East Timor in 1975 at the Auckland Film Festival (a couple of days after the Melbourne premiere), but it's a delight to see that it is getting such a positive reception.

After a brief homecoming stopover in Fiji - thanks to Air Pacific - David was thrust back into the complex post-coup issues that cast a shadow over the Pacific. First the PINA media flop last week and now the Cairns "free trade" jackup prelude to the Pacific Islands Forum. Good to see the recent Mark Davis Dateline interview with Commodore Voreqe Bainimarama, which included some pithy insights into the " 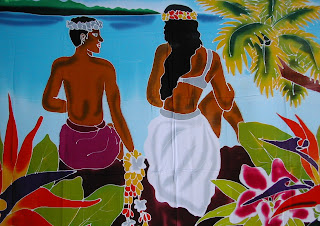 one person, one vote" mantra to repel three decades of a racist and corrupt so-called democracy.


It is also worth sharing this recent dispatch from NZ-based German journalist Ulli Weissbach. He doesn't run his own blog, so here's his personal perspective (abridged) directed to "friends and foes" alike following a three-week research trip:

Part of my job in Fiji was to prepare the ground for a German TV foreign affairs programme on Fiji. I had a chat with government spokesperson Lt Col Neumi Leweni, who assured me there would be absolutely no problem for the German TV crew entering Fiji and interviewing the "evil dictator".

Experience 1: I actually saw him once, entering the lobby of the Holiday Inn hotel in Suva. No heavily armed bodyguards around him, just a guy in a plain suit. If a waitress at the bar hadn't pointed him out to me "Look, there's Frank", I wouldn't have noticed him. Now, dear friends and foes, do you think an evil dictator, who is hated by half of the country, would dare to walk into the public arena without bodyguards?

Experience 2: I talked to an Indian girl working at a Denarau Hotel and asked her how she feels under Frank's dictatorship. She said she actually feels better, because she can now safely walk the streets of Nadi at night. The crime rate has come down considerably since Frank took over, which is backed by official statistics as well.

Experience 3: I circumnavigated the whole of Viti Levu without seing one military checkpoint, except for Nadi airport. Dear colleague Barbara Dreaver, can you please stop peppering your Fiji reports with outdated checkpoint footage from TVNZ's archive? 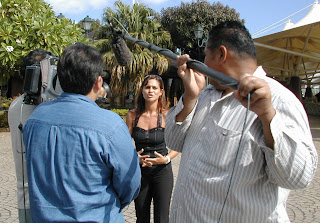 Experience 4: Along the road I saw a lot of Methodist Church gatherings, where priests thundered through loudspeakers to their congregation. I can't prove it but it all sounded too familiar to me and reminded me of the time when I worked in Fiji at the end of the 1980s. Back then, a Reverend called Lasaro was the chief ideologist of the fundamentalist Methodist Church and incited indigenous Fijians to burn down Hindu temples and mosques. He's still the chief mullah of the Methodist Church and it makes perfect sense to me that Frank is trying to constrain him and his other mullahs. The Methodist Church was behind all the coups before Frank, it is a highly politicised organisation with close ties to the ultra-nationalistic and racist Taukei movement. I call them the Fiji Nazis.

Experience 5: The tourism industry is doing rather well, due to a lot of Australians and Kiwis ignoring their countries' negative travel advisories. But still they are hurting and hotels are cutting jobs, which proves, that sanctions only hurt the little people, not the government they are aimed at. Same with the sugar cane industry, where EU sanctions and the cutting of subsidies will hurt the little people - ie. Indo-Fijian farmers.

Experience 6: Yes, newspapers and other media are constrained and intimidated and no journalist can agree with that. Yet many of them are Australian-owned and follow their own agenda. NZ journalists who are banned from Fiji, like "Pacific commentator" Mike Field and TVNZ reporter Barbara Dreaver, have only themselves to blame. Mike Field has been found guilty of inaccurate comments about Fiji by the BSA (Broadcasting Standards Authority). And Barbara Dreaver filed a report about poverty in the goldmine town of Vatukoula, which was highly inaccurate...

If that's the quality of NZ journos reporting about Fiji, who can blame the Fiji government for wanting to keep them away?

Experience 7: During my Fiji trip, Commodore Bainimarama held a widely publicised speech to the nation about his Strategic Framework for Change, which outlined his envisaged roadmap to elections and democracy. It reflected many of the goals of his proposed People's Charter for building a better Fiji, which has been rubbished repeatedly by Mike Field and consorts as an "idealistic" document.

Idealistic - yes, it's in the nature of constitutions that they promise a better future for their people. But criticising it from a country that doesn't have a constitution and a fair non-racial electoral law is a bit rich. None of these commentators and journalists has bothered to properly inform New Zealanders about the constitutional process in Fiji. Read the People's Charter and make your own judgment. Some of it's principles would suit NZ as well - like equal voting rights for every citizen no matter what his ethnicity is.

Conclusion: We can judge Bainimarama in 2014, when his promised elections will be held. It took my own home country Germany four years to develop and agree to a truly democratic constitution after WW2. And guess who forced it to do so - the military government of the occupying forces (USA, GB and France)?

So please: GIVE FIJI A BREAK!

thank you so much for the link to the SBS interview with Fiji PM Frank Bainimarama. Finally somebody at least tried to get to the heart of the matter, or the heart of the man if you like.
As I said: is that the look of an evil dictator? Firm, determined, strong-handed - yes. But I believe, it's the only way to cut the Gordian knot of Fiji politics.

I have my doubts about the wisdom of appointing Taukei hardliner Ratu Inoke Kubuabola as foreign minister. After all, he's the man who got me kicked out of the country in 1990. But maybe Frank needs to include these forces as well in his effort to unite the country.

'....Some of it's principles would suit NZ as well - like equal voting rights for every citizen no matter what his ethnicity is...'

An interesting article until the above sentence - since when did NZ not provide all of its citizens with equal voting rights?

Bully for you (collective): at last you're 'Getting It'. Too right we are not going to settle for anything less now than an equitable voting system. Why would Australia or New Zealand ever have acquiesced in it being otherwise? Cat got their tongues? Mistaken and received ideas about ethnic-supremacy and the Master Race - so long as it is 'Over there' and 'Not on our turf': Come on, this will just not do - not in the 21st century at almost the end of the first decade. Time for a reality check in the Antipodes. And.....reconciliation with hostage-takers, neo-terrorist thugs is just not going to happen. Not while some of us still have breath to breathe! Would any of you choose to do deals of this kind? Of course you would not. Wishy-washy accommodation will never deliver the goods that each and every citizen is entitled to here in Fiji just as elsewhere. Chiefs and politicians are all impotent in this arena: chiefly-politicians particularly so. And the PM/Commander appears to fully recognise this truism. The trick is to 'deliver democracy' which is truly participatory - that is no small goal and will require massive input. So, why not 'get aboard' to assist in lieu of crowing from the margins? Fiji will show the world how it can be done: why not?

Nit-picking again? NZ is and has always been scrupulous about equitable voting rights - since NZ women were given the right to vote ahead of most Western-style democracies. So, this being a given, why have you all been so reluctant to allow Fiji citizens an equality of privilege? You have actively partcipated in denying us our just rights in Fiji by imposing bans and 'smart sanctions' to impede progress here. Shame on you all! Nothing SMART about that, nothing smart in the least. You have actively worked to harm the small and ordinary people of a proud nation. So what is there to be so self-satisfied about? I for one will never forget your bully-boy-on-the-block attitude, your mealy-mouthed failure to condemn what should have been condemned back in 2000/2001 and thereafter. Your connivance in demanding elections and then seeing them 'bought' with our taxes. Our children and grand-children deserve more than this. They deserve assured, equal and free democracy with liberty, transparency and accountability in governance, second to none, in the land of their birth. One fully expects Australia and New Zealand to support this and to assist this - embrace and encourage this saspo.