PACIFIC MEDIA WATCH has filed an item about journalists, media educators, lawyers and NGO advocates being up in arms about the outrageous criminal libel case against respected East Timorese editor and publisher José Belo. The Timorese government is under increasing international pressure to drop this case. What an irony - José risks being imprisoned in the very jail where the Indonesian oppressors tormented him before independence. José has been charged followed publication of an article in his impoverished newspaper and online publication, Tempo Semanal, making allegations of corruption over the issuing of government tenders against Justice Minister Lucia Lobato.

According to PMW, the open protest letter, under the umbrella of the S 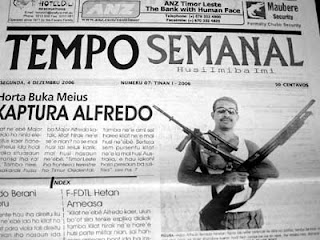 ydney-based Australian Centre for Independent Journalism (ACIJ), has been signed by 85 media industry, legal and academic people ranging from the ACIJ’s Professor Wendy Bacon to ABC Four Corners investigative journalist Liz Jackson, SBS Dateline’s Mark Davis and British-based filmmaker and author John Pilger. Pacific Media Centre director Associate Professor David Robie and PMW co-founder Peter Cronau are also among the signatories. The letter is being sent to President José Ramos-Horta, in New Zealand this week on his first official visit abroad since being wounded in a rebel attack a year ago, and Prime Minister Xanana Gusmao.

The Timor-Leste government has passed a new penal code that decriminalises defamation but the President hasn't yet promulgated this. José Belo is charged under the old Indonesian law, a hangover from the Jakarta colonial era.

While making no comment on the merits of [José Belo’s] allegations, we are disturbed by the application of criminal defamation laws against one of East Timor's bravest and most respected journalists.

Belo's role in documenting the atrocities of the Indonesian occupation and disseminating that information to the international media is well known.
Since self‐government, José has emerged as one of the most productive, disciplined and independent journalists that East Timor has produced. He has become a key figure in the attempt to build a democratic media in your country.

To be imprisoned by your government would be a great injustice to José and more importantly, a terrible precedent for all media in East Timor. Such laws criminalise and suppress good journalism, they help cloak corrupt and questionable behaviour of public officials and they diminish the reputation and international standing of the nations that apply them.

We note that the laws under which José Belo has been charged are left over from the old Indonesian regime, and understand that new laws more suited to a democratic society have been drafted but have not been placed before your Parliament.

We pledge our support to José Belo and all East Timorese journalists who may face imprisonment for the practice of their profession. We urge you to take all actions within your power to bring about the dropping of this charge and the removal of criminal defamation laws in East Timor.

The full list of signatories is at PMW. And a good backgrounder is Mark Colvin's PM programme on ABC Radio. We're with you, José!