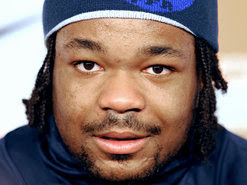 A BREAK from Pacific media and politics for a moment to celebrate France's awesome 21-16 rugby win over defending Six Nations champions Wales in Paris against all the odds. Coach Marc Lièvremont who has been under mounting pressure, defied the critics and chose a centre as a makeshift flyhalf, a 20-year-old novice at centre and a non-specialist kicker to take the team's shots at goal - yet the gamble paid off with a stunning triumph for Les Bleus. A special word of praise for a young 110 kilo centre, Mathieu Bastareaud, who plays with a certain rugged Pacific style (another Lomu?). In fact, he was born in Paris and has West Indies heritage (Gaudeloupe). He made several characteristic breaks and looks to have a bright international future ahead of him.

In this mood, have a look at some of the great French tries in recent years - including Serge Blanco's classic against Australia in the inaugural World Cup and the devastating touchdowns by Christophe Dominici, Richard Dourthe and Phillipe Bernard-Salles that knocked New Zealand out of the 1999 World Cup.