NZ's spy agency SIS 'a law unto itself' 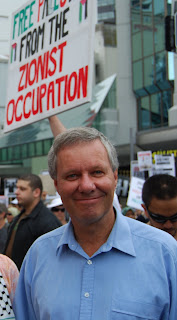 GREEN MP Keith Locke, spokesman on Pacific and international affairs and social justice champion of the underdog, has been the latest revelation on New Zealand's "spy on our citizens" controversy. The Security Intelligence Agency's stocks have sunk to a new low after it was revealed that Keith had been spied on since he was 11 - and for at least four years since he was elected a Member of Parliament in 1999. As he pointed out in the House what an "offence to democracy" it is that the SIS - not even upholding their own legislation which requires them to be watching people "involved in treason, espionage and terrorism" - should be devoting much of its efforts to spying on civil society dissenters. So far not much has emerged on similar spying against dissenting journalists (if it indeed happens). But watch this space. Keith's reflections in his parliamentary address-in-reply on Feb 10 are recorded here by Hansard:

KEITH LOCKE (Green): I would like to begin my speech by complimenting the Director of the New Zealand Security Intelligence Service, Dr Warren Tucker, for the new spirit of openness that he has conveyed since he took over a year or so ago. It is very good that he is allowing under the Privacy Act people like myself and others who have been involved in various progressive issue movements to look at their files, because what they show are some very bad practices in the history of the SIS in targeting dissenters. In my case it concerned my involvement in the anti-Viet Nam war movement, the peace movement against nuclear weapons, the anti-apartheid movement, and movements for human rights in Latin America, the Philippines, and elsewhere.

The horrific thing about that file is that it shows that the SIS had infiltrators pretending to be fellow campaigners who reported on everyone who was present at the meetings—public and private—and who was doing what, who was carrying the banners, who was going out, and even trivial details such as at 0900 hours so-and-so went out to buy a Sunday paper, and very detailed stuff. In my own case, my movements around the country, around the world, what car I was driving, romantic attachments etc were noted—all completely unjustified in terms of the law of the SIS, and in terms of any concept of fair play, whatsoever.

The records in my case go from when I was aged 11 in 1955, and the file [has] been updated and continued since I have been in Parliament, not only with news clippings but also with monitoring of my private conversations with constituents in the Sri Lankan-Tamil community back in 2003, before I went off on a peace monitoring trip to Sri Lanka. It is good that the Campaign Against Foreign Control of Aotearoa (CAFCA), and other groups have also got their files, which show a similar pattern over the years of the SIS of not upholding their own legislation—where they should only be watching people involved in treason, espionage, and terrorism and the like, but countering the activities of campaigners in the interests of the Government of the day.

In my case that countering meant trying to stop me from getting jobs, and conspiring directly with employers. It is recorded that I supported someone for permanent residence in New Zealand, and it was reported back to the SIS, which probably stopped that person from getting permanent residence because of my personal SIS personal file. So it had concrete effects, it was not just about being watched; it hindered the careers of myself and probably many, many others.

It is good that [Prime Minister] John Key has responded by asking the Inspector-General of Intelligence and Security, Paul Neazor, to look at the way in which files are set up, maintained, and closed. It is good that John Key says that I, and, hopefully, others who have received their files showing a similar pattern can cooperate with the inspector-general to really get to the bottom of this issue.

We need a much broader inquiry, but that is a good start. The surveillance of the SIS itself, or what might be called accountability measures or oversight, are very weak. In Parliament today my colleague Kennedy Graham tabled what he received from the official sources as the current membership of the Intelligence and Security Committee. It still lists the members of the previous Parliament, including Winston Peters. There has been no new committee set up over the past few months of this Parliament. When I have written questions in the past I have found that the committee meets only about an hour a year, enough time to hear a little report from the director of intelligence, and perhaps have a cup of coffee. It is not an oversight body, and that is why that over the years that the SIS has been able to be, effectively, a law unto itself, even spying on members of Parliament.

Under this MMP Parliament we represent a much wider range of views than was the case when we had a Labour-National monopoly, and the Green Party, in particular, represents movements outside of Parliament of people fighting for social change, environmental issues, and international social justice issues like I was involved in. It is a sad logic that if they are spying on all these movements for social change, and international solidarity movements that they are spying on MPs. It is an offence to democracy in this country, and, particularly, parliamentary democracy and the independence of Parliament from the executive, and that is why it must be opposed.

Meanwhile, strategic intelligence commentator and academic Dr Paul Buchanan (on leave from Auckland University and now visiting associate professor of political science at the National University of Singapore), has profiled the SIS head in a Scoop article, "The curious case of [Dr] Tucker". He reminds us that Dr Tucker:

Assumed leadership of the SIS in November 2006. At the time the agency was under heavy public scrutiny due to its mishandling of the [Algerian theologian and politician] Ahmed Zaoui request for political refuge (where it manipulated intelligence data to manufacture a case against Zaoui, only to have it discredited and eventually withdrawn under legal challenge).

Since Tucker's appointment at the helm of the SIS, he has promised "more transparency and public accountability" in the spy agency's operations. But Buchanan notes that the SIS sems to have a recent fixation on human rights cam,paigners, environmental and indigenous rights activists and critics of the government and the SIS itself: "It's disturbing because many of those recently targeted by the SIS domestic espionage programme post no threat to NZ's national security."

Stuff reported on March 17, Green MP Keith Locke was unlikely to be the only person spied on by the SIS after entering Parliament - a practice a government watchdog says should now be scrapped. Prime Minister John Key asked SIS head Dr Warren Tucker to deactivate files on sitting MPs and consider a system to allow surveillance only when deemed necessary with consent from the Speaker. Pictured: MP Keith Locke at a rally in support of the people of Gaza in Auckland last month. Photo: David Robie

MEN you are onto-it but you need to dig deeper – Much of NZ
Bureaucracy is as you say **A Law unto itself** so called Child
Support, so called Family Court, so called Working for FAMILIES, so
Strengthening FAMILIES are Spin Doctored names to perpetrate GOVT lies as is SIS.