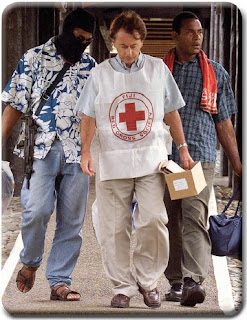 IT'S HEARTENING to see New Zealand filmmaker and associate professor Annie Goldson and her team raking in the kudos for a poignant and challenging doco about Fiji politics, the gay rights community, ethics and human rights. It has just picked up the Grand Prix award at the sixth Pacific Documentary Film festival in Tahiti. An Island Calling is far more than a film about a particularly gruesome and high profile double murder. Based, in part, on the book by Owen Scott, Deep Beyond The Reef, it tells the story of the killing of former Fiji Red Cross director John Scott (Owen's elder brother) and his partner Greg Scrivener in mid-2001 by Apete Kaisau. As Lumière Reader describes it, there is a real irony in the film:

Scott’s great-grandfather was one of the missionaries who brought The Bible to Fiji in the 19th Century. That same Bible was used as a justification by Kaisau to murder Scott and Scrivener. In the process of telling this tale, Goldson draws in issues such as history, colonisation, evangelical Christianity, homosexuality, turning what could have been seen as a simple murder into something much more complex and morally ambiguous.

Following the impressive track record that she has set with other films such as the 1999 documentary Punitive Damage on the killing in East Timor of Kamal Bamadhaj, Goldson told Lumière's Brannavan Gnanalingam:

“I’d always been a bit of a Pacific watcher. Given we live here in New Zealand I’ve always been interested in the politics of the region. Fiji is one of the hotspots of the Pacific.”