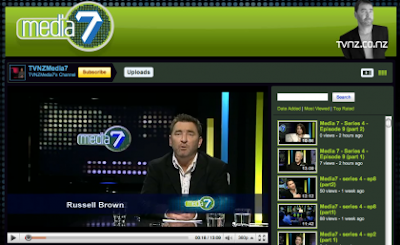 MEDIA7 turned to the Pacific for a change this week and profiled coverage of the region in the wake of the unveiling of the draft media freedom decree in Fiji. The controversial Barbara Dreaver report on Samoa's "gangs, guns and drugs" also got an airing - with some tart criticisms of the Broadcasting Standards Authority from the panel. Here is Media7's blurb on the programme (running four times over this weekend on digital TVNZ7). Watch it on YouTube - Part 1 and Part 2 - or on TVNZ on demand:

New Zealand television viewers were this week served up the first instalment of the $200-million dollar drama series, The Pacific.

But what about the real life dramas that are being played out in the Oceanic region and the millions of New Zealand dollars and other nations' foreign aid money that is spent to prop up various Pacific nations?

The reporting is patchy at best, given the shrinking budgets of mainstream media and the difficulties inherent in reporting from this sensitive region.

News organisations are finding it hard to report Pacific issues and hold regional governments to account in the face of increasing media censorship and repression.

Some of the problems can be put down to a clash of cultures. But journalists and editors face a daunting task when reporting on the actions of a military dictatorship, a semi-feudal monarchy and a group of emerging nations where tribal and clan loyalties are often at odds with basic democratic rights.

The Royal Commission into the sinking of the Tongan ferry, Princess Ashika, has opened up an unsavoury can of worms and the latest "media rules" about to be imposed by the Fijian regime will further stifle debate in that country.

Media7 this week surveys the media landscape in the Pacific with David Robie, Barbara Dreaver and Tim Pankhurst joining Russell Brown in the studio.

Dr Robie is director of the Pacific Media Centre and convenor of Pacific Media Watch. Dreaver is a seasoned Pacific affairs reporter who has experienced the heavy hand of a Pacific Island politician on many occasions.

Pankhurst, former Dominion Post editor and now chief executive of the Newspaper Publishers' Association, is a fierce advocate of media freedom in the face of threats and intimidation, such as we are seeing in Fiji.

I find Barbara Dreaver's uncompromising black and white approach to Pacific media issues deeply irritating. She seems utterly incapable of appreciating the areas of grey that abound in Fiji especially and seems to think Pacific journalists deserve precisely the same unfettered freedom as their metropolitan counterparts. If David Robie can appreciate the need to strike a balance between freedom and the media's responsibility to contribute to nation building in developing countries, why can't the fragrant hackette from Tarawa? Fiji is facing a Singapore-style media framework because some journalists there couldn't comprehend this balance either. None of this was canvassed properly in the Media 7 discussion, which amounted to yet another example of how out of touch NZ journalists have become with their own backyard.