REPERCUSSIONS from Tonga's "rust bucket" disaster that killed 74 people - mainly women and children - at sea in the kingdom last August are finally rocking the royal and noble establishment to its very core. And while several layers of maritime and government authorities have been exposed, some senior expatriates look set for paying a heavy price for the tragedy.

Comical efforts by Information Minister 'Eseta Fusitu'a to effectively gag the local Tongan media over the Royal Commission of Inquiry into the Princess Ashika ferry disaster last August 5 were in vain as Matangi Tonga reported on the here-is-the-report-but-you-can't-have-it farce. Barbara Dreaver, writing on her TVNZ blog, also took a potshot at the Tongan government for "hiding behind procedures". As well as extensive coverage, the online news portal Matangi Tonga published a leaked copy of the inquiry report. It was also published by Pacific Media Watch.

The leaked report has been highlighted by the Scotsman for describing Lord Ramsay Dalgety QC, secretary of the Shipping Corporation of Polynesia, which operated the government-owned ferry, as "unfit to hold such an important position", "lacking credibility" and accused of being "evasive when giving evidence".

The commission also said the former director of Scottish Opera was "dishonest and lacked integrity in his role".

Lord Dalgety, 64, was arrested, charged with perjury, and put under house arrest for 24 hours on his last day of giving evidence to the committee in February.

Tonga imposed a blackout on reporting the case. Two others had been arrested earlier.

Radio NZ International reports that the New Zealand businessman who formerly headed the Shipping Corp, John Jonesse, is one of three people charged with manslaughter by negligence over the sinking of the Ashika. 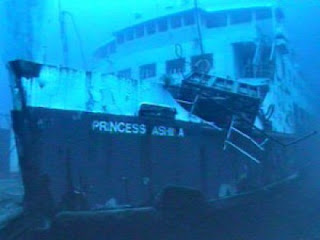 The Shipping Corp itself is also facing a charge of manslaughter.

According to the Scotsman's Shan Ross, the final report details "unimaginable and careless errors by people in positions of responsibility":

It also says the sinking was the result of systemic and individual failures and that the deaths were both "preventable and senseless".

[Lord Dalgety] has been strongly criticised in the report for failing to order an independent survey before the purchase of the ferry, which he admitted to the commission in January had been a "rust bucket".

The report criticised Lord Dalgety's lack of competence in admiralty law, in which he said he was a specialist. It described as "disturbing" the fact that he did not have an up-to-date copy of the Shipping Act and admitted he had not "checked it for years".

A claim by officials that the vessel was in good condition or well maintained "is not only patently absurd, but dishonest", the report said. It notes the ferry was "grossly overloaded" the day it sank.

Lord Dalgety holds a number of powerful and well-paid posts in Tonga, including chairman of the electricity commission.

The royal commission said it considered evidence regarding civil responsibility, but that determining criminal responsibility was up to other authorities. Police have said their investigations are continuing.

Meanwhile, the Tongan king is under pressure to sack members of government amid allegations they were in part to blame for the failures that led to the tragedy.

Pacific Media Watch's Josephine Latu has filed some excellent reports on the leaked inquiry, including a comprehensive backgrounder, on Pacific Scoop. The full inquiry report is on the Pacific Media Watch database.