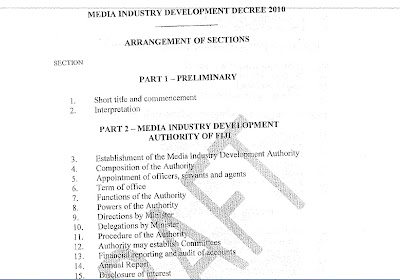 SO Jim Anthony has had the last laugh. And at least two critical components from his discredited 2007 "Freedom and independence of the media in Fiji" report have found their way into the draft Media Industry Development Decree 2010. No surprise, of course. All the signs have been there for the past couple of years. It was a sure bet that the regime would adopt a Singapore-inspired Media Development Authority and a Media Tribunal with draconian powers (see p. 6 of Anthony's executive summary). But at least his crazy idea of a 7 percent development tax was ditched.

The tragedy of the Anthony report and the public slanging match with the media that ensued is that neither should have never taken place. Had the Fiji news media got their act together and improved things on their own accord, rather that persevering with the "toothless tiger" Fiji Media Council with all its overdue faults, this draconian draft might have been headed off. The independent Media Council review in February 2009 was a job well done - but it was more than three years too late to have any impact.

Now we have a ruthlessly chilling climate of self-censorship being imposed in post-coup Fiji. A year of censorship since the 1997 constitution was abrogated on April 10 is taking its toll. Soon we will have a generation of journalists (average age in Fiji is less than 25)that will barely know what it was like to work in a genuinely free press.

The regime is systematically destroying what had been traditionally one of the strongest media industries in the Pacific.

Media improvements were needed, true. Especially over "fairness and balance". But government authorities have ignored the commonsense independent Media Council review recommendations last year and instead been influenced too heavily by the harsh proposals of the discredited 2007 Anthony report.

Ironically, one "success" of the council is to have its code of ethics adopted in the decree - "lifted word for word", as Fiji Broadcasting Corporation's news director Stanley Simpson points out. Summing up today's media "consultation", he said:

Among the major sticking points during today's discussions 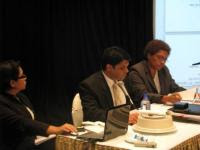 was the make up and independence of the Media Development Authority, the imposition of fines for breaching certain provisions under the decree, and the ability of the media to appeal or seek redress from the courts if the Media Tribunal ruled and imposed fines against them.

Limits on foreign ownership of media organisations in Fiji also featured, with the proposed decree set to take out Australia’s News Ltd’s ownership of the Fiji Times.

Actually, the foreign ownership limitation would gain widespread sympathy. Many believe that Rupert Murdoch's News Ltd and the Fiji Times have not been "in tune" with Fiji for many years. Nevertheless, a 10 percent limit is to punitive. Perhaps 49 percent and a reasonable adjustment window to divest shares would have been more realistic - and fairer.

Café Pacific's colleagues at the media consultation provided this feedback:

S4(1): The Authority shall consist of a director appointed by the Minister.

Response: This is putting too much power in the hands of the minister. It could open the door to political appointments, and jeopardise the independence of the authority. The person appointed as director should be one who enjoys the confidence of all the stakeholders, not just that of the minister or the government of the day. There needs be more consultation; it's too risky to leave such a crucial appointment in the hands of one person or one party.

4(3): Director must be remunerated in a manner and at rates subject to terms and conditions determined by the Minister.

The civil service and statutory bodies have clear and transparent salary structures based on academic qualifications and experience. These guidelines should be used to determine the salary of the director, which should be made public. This will instill confidence in the process and the
authority, and it will protect the integrity of the minister also.

Terms of office (p. 7)
6(2): The Minister may remove the Director of the Authority at any time from office if the Minister considers it appropriate in the public interest.

23. The fines and jail terms stipulated (F$100,000 to $500,000; or imprisonment for five years or both) for breaches of content regulation are too draconian. It will have a chilling effect and stop the media from reporting issues of national interest. It is a disincentive for new entrepreneurs wanting to enter the sector. It will also scare away people who may want to join the profession.

This is the authority duplicating what the courts are already empowered to carry out. This is outdated, and contrary to whistleblower protection legislation being mooted nowadays as a safeguard against corruption. This is not something that will encourage investigative reporting, which is something this government claims it is keen to promote.

26. Power to enter premises and search, seize under warrant

This is the authority duplicating police work.

27. Offences relating to enforcement (p. 15)
Any person who fails to disclose documents faces maximum fines of $100,000 and jail terms of up to five years, which are quite harsh. This will put an end not only to the whistleblowing culture, but media disclosure of confidential documents in the public interest.

The tribunal can order the media organisation or any employee to pay monetary compensation to aggrieved complainants. We already have defamation and other laws for compensatory damages. Why duplicate this function and waste resources? This is something best left to the courts.

Summing up: The decree gives too many sweeping powers to the minister which can be dangerous. There is duplication of the work that courts have been set up to do, which is an unnecessary waste of resources.

The fines and jail terms stipulated are extremely harsh. The media has been denied the freedom it needs to inform the public and to act in its interest.

Regarding your comments: "Actually, the foreign ownership limitation would gain widespread sympathy. Many believe that Rupert Murdoch's News Ltd and the Fiji Times have not been "in tune" with Fiji for many years".
As a respected academic, you need to qualify such a statement.
Do you mean sympathy amongst dictators suppressing the rights of people, or among academics speaking from the safety of offshore, or former Fiji citizens living comfortably overseas while those in country suffer in silence, or those within Fiji who continue to buy the Fiji Times every day?
Perhaps you are not so far removed from Jim Anthony, who also tended to make such sweeping generalisations without relevant evidence.