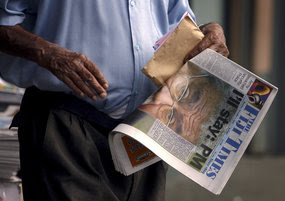 FIJI WATCHER Crosbie Walsh has come up with his own assessment of the draft Fiji Media Industry Development Decree and concludes "wide counsel" is needed to address the plethora of issues raised in this proposed law. Among the many considered points he makes is how sections of the Fiji media - particularly the Fiji Times - have in his view failed to report fairly the changes taking place in the country. Excerpt:

The [Fiji regime's] Roadmap aims to develop the institutional and economic infrastructure to benefit Fijians irrespective of race; it has taken a number of measures to reduce poverty and promote rural development; expose and punish rampant corruption and abuse of office; produce more harmonious relations between the major races; and in the 2014 elections all votes will be of equal value.

In pursuit of these objectives, those who used their office or status to gain preferential advantage for sections of the ethnic Fijian elite (not all ethnic Fijians as they claimed), such as the SDL [Soqosoqo Duavata ni Lewenivanua] party, the Great Council of Chiefs and the upper echelons of the Methodist Church, and their counterparts in the civil service have been effectively sidelined.

How was all this reported by the Fourth Estate? Between 2006 and the the Abrogation of the Constitution and the imposition of the Public Emergency Regulations (PERS) in 2009, the media - but most especially the Fiji Times - was totally hostile.

On any reported issue, my count was that about four anti-government people to one government spokesman would be cited. On no controversial issue was the government position fairly reported.

The Fiji Times position was that this was an illegal government, and by definition, nothing it did could be "good." Following the imposition of PERS, the Fiji Times published almost nothing (positive or negative) about what the government was doing.

The de facto government had ceased to exist. But when, on the rare occasion, mention had to be made, the PM and other government people were referred to without their proper titles. This, however justifiable, was a deliberate insult that unwisely invited government retaliation.

Walsh makes a wide-ranging assessment in his analysis and also critiques Western assumptions about the role of the media in a developing country such as Fiji, espousing the need for a development communication model rather than the more familiar Pacific "watchdog" approach. In this context, the Singaporean-inspired model for Fiji isn't quite as extreme as it has been portrayed in Australia and New Zealand:

A third assumption is that western notions of media freedom usually provides the public with access to all information, presented in a fair and balanced manner.

Rarely do we see the media speaking up for the poor, the underprivileged, consumers, the trade unions, workers on strike, or left-leaning governments. The Fiji Times most certainly did not when Fiji Labour Party-led government was in power. Media ownership and the extent of media freedom are linked.

I think Croz makes good sense and perhaps Australia and New Zealand and others concerned about Fiji need to have an appreciation of the background as to why what is taking place is indeed taking place.Fiji is a racially and politically divided third world developing country, struggling with its foreign implant-Westminster form of democracy. Media in Fiji needs to act like a third world media with a sense of nation- building and promoting harmonious relations between the races. Obviously these have not been forthcoming from certain sections of the media. All Bainimarama and Fiji wants is some sense of social responsibility from media.Of course, I am against those "draconian' clauses in the new media decree.