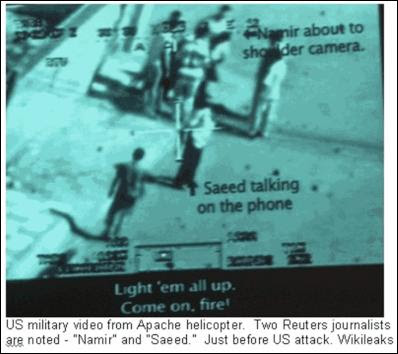 THE whistleblowing website WikiLeaks' tape apparently showing the cold-blooded murder of civilians - including two Reuters journalists - by US troops in Iraq in 2007 has shocked the world. It will undoubtedly form the basis for an ongoing investigation by the global news agency - one it had sought in vain nearly three years ago. The video, shot from an Apache helicopter gunship, clearly shows the unprovoked slaying of a wounded Reuters photojournalist, Namir Noor-Eldeen, his assistant, Saeed Chamagh, and his rescuers. Two young children involved in the rescue were also seriously wounded.

The video captures an incident on 12 July 2007 in a Baghdad suburb. This event has been a matter of controversy since the killing of the two journalists. This chilling footage will renew pressure for a full investigation, and asks a Pacific journalist: "Is WikiLeaks the future of investigative journalism?"

According to Michael Collins on Scoop:

WikiLeaks has produced more scoops than the Washington Post has in the past thirty years, according to a report by The Guardian. The web-based service was “founded by Chinese dissidents, journalists, mathematicians and start-up company technologists, from the US, Taiwan, Europe, Australia and South Africa”, according to their “About” page.

WikiLeaks targets oppressive regimes throughout the world, as well as regimes seeking to repress information on illegal and unethical government actions and policies.

The website's organisers say they were leaked the footage, which they say come

s from cameras on US Apache helicopters. Accoirding to the BBC, they say they decrypted it, but would not reveal their source.

The WikiLeaks site campaigns for freedom of information and posts leaked documents online. So far there has been no official Pentagon response.

However, Reuters and the Associated Press have been widely quoted unnamed US military officials as confirming the video was genuine.

The Baghdad video is the latest in a long list of "leaks" published by the secretive site, which has established a reputation for publishing sensitive material from governments and other high-profile organisations.

In October 2009, for example, it posted a list of names and addresses of people it claimed belonged to the British National Party (BNP). The BNP described the list as a "malicious forgery".

WikiLeaks posts video of 'US military killings' in Iraq 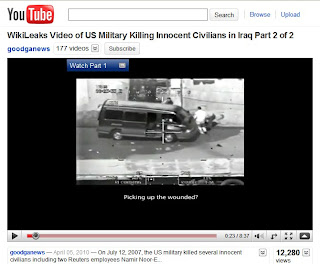 Did Fiji Times even mention the story in their world news thumbnail look at the planet?

Does The Australian consider the documented "war crimes" by US less or more dangerous than the new media decree?

All this jazz about being muzzled media in Fiji; should consider the reportage of these Iraq video tapped genocide of this Reuters reporter and unarmed citizens by the main stream media; including Rupert Murdoch's media machine that refuses to admit that Sept 11th 2001 was an inside job. Is that enough truth for the sheep; who have been dumbed down by the "celebrity adoration" styled journalism.

Who even cares (apart from the Corporate sponsors) that Tiger Woods is playing the Masters? The world is stirring from its slumber of media induced dumbness!