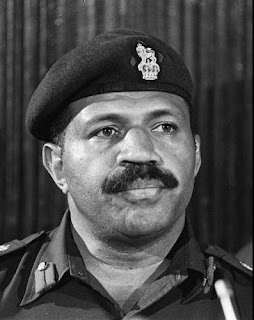 AN EXCERPT from a documentary about the original Fiji coup led by Lieutenant-Colonel Sitiveni Rabuka on 14 May 1987. It was made by University of the South Pacific journalism students a decade later. In 1997, Patrick Craddock, a former Radio New Zealand producer, was
working at USP in Suva with François Turmel, a former
BBC journalist who established the the Fiji-based regional journalism training programme with French support. As part of an exercise in documentary making, the students collected audio interviews with people who had
experienced the 1987 coup in Suva.

At the time, none of the participants wanted to be identified by name with this documentary and no names were included in the

production details. The documentary was seen as an exercise for USP journalism students and was never broadcast. Most audio interviews were done on location. The programme is now a small part of the history of the period.