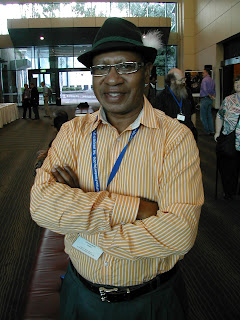 By David Robie in Brisbane

Five months ago, he was the target of would-be assassins. Now he is the magnet for politicians wanting to rein in the powers of his state corruption watchdog.

But Chronox Manek is one of the most popular public figures in Papua New Guinea and thousands of ordinary citizens flocked to a peaceful protest this week against a controversial draft law aimed at curbing his powers.

And he charmed his way to the hearts of freedom of speech and free media advocates gathered in Brisbane for the annual two-day UNESCO World Press Freedom Day conference marking May 3.

Manek, Papua New Guinea’s Ombudsman, is the scourge of the coalition government led by founding “father” Prime Minister Sir Michael Somare – and a problem for Opposition politicians as well.

However, many journalists and public activists see him as a courageous and determined campaigner against corruption by public figures.

Corruption epidemic
After marching on Parliament House in Waigani, the demonstrators delivered a petition of 20,000 signatures demanding a halt to the legislation curbing the commission’s powers.
The petition follows several weeks of public protest and condemnation over what critics describe as serious erosion of governance in this country where corruption is an epidemic.

Maladina’s Parliamentary Committee into the Ombudsman Commission tabled amendments impacting on both the commission and the so-called Leadership Code governing conduct by politicians and top civil servants.

One of the critical changes block the commission’s current powers to freeze public funds suspected of being used for corrupt or improper purposes.

The bill also imposes a four-year time limit on investigations, effectively blocking the ability of the commission to probe historical corruption cases.

Another provision means that politicians and civil service heads that breach the Leadership Code will no longer be able to be tried in criminal courts.

The bill has passed two readings with unanimous parliamentary support in spite of the public criticism. However, although the last vote was 83 to nil in favour of the draft law, the Opposition now says that it had been misinformed over the provisions and is now opposed.

Transparency International recently ranked PNG as the 151st most corrupt out of 182 nations.

In Brisbane, Manek spoke in two freedom of information panels in the conference hosted by the University of Queensland.

While saying the free expression and free press provisions in Article 19 of the Universal Human Rights Declaration were enshrined in the country’s constitution and that the courts enforced these rights, he added there was a major problem.

“This is about the availability of records – it is very low priority for government business,” Manek said.

“It is all very well being entitled to the information, but in many cases the government is unable to supply it because of the poor state of official records.”

At the time of independence in 1975 and for several years later, the importance of records and information management had been in good health.

He said it was the duty of the government to provide basic information to its citizens and to build trust.

The role of the media was important too.

“The government uses the National Broadcasting Corporation with talkback and radio and television to get policies across to the public. That’s a good start,” he said.

“But with media freedom goes great responsibility for the news media.
“Freedom of the press is not a privilege, but a responsibility.”

The media could do more to get information before the public and “we need more investigative journalism”.

He challenged the upholders of the nation’s information policy to recruit “honest” people to rebuild the open culture.

Last December, Manek was left for dead after several gunmen opened fire on him outside his home, gangland style.

They blocked his car as he waited for his driveway gate to open and fired through the windscreen of his Nissan Patrol.

He was hit in the shoulder but he told The National newspaper after the attack that a point-blank shot aimed at his chest glanced off the vehicle door.