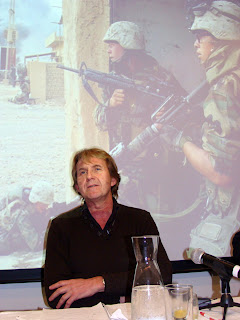 A REAL irony in these cynical times about the global “journalism crisis” and the inability of many journalists and ginger groups to seriously tackle the shackling of the media by corporate conglomerates, that AUT University experienced a packed house this week to debate safety for war correspondents. Some 200 people turned up to see the film Balibo and discuss media safety.
It may have been a mere sprinkling of journalists themselves, but the audience was made up of a horde of aspiring journalists, civil society advocates concerned about the state of the Fourth Estate and media educators and social scientists whose job is to be reflective about the media. All were treated to an inspiring evening of debate and insight into the state of the profession and the challenges of an increasingly hostile world for journalists.

Keynote speaker Tony Maniaty, author of Shooting Balibo: Blood and Memory in East Timor, spoke of the growing trend to what he calls the “outsourcing of danger” – a growing reliance on freelancers and independents to do the dangerous work. Reflecting on the East Timor experience, he also notes how easy it is nowadays for younger reporters today to sidestep the years of grind and experience taken to become a war reporter in the past.

Today, my students can - and some do - circumvent all that rigmarole by walking around the corner, buying a laptop and HD camera and a cheap air ticket to Kabul, and two days later be filming – alone, unsupported - on the frontline. And in this increasingly prevalent scenario are two more challenges facing us. One, we need to inject compulsory safety training modules into our media courses; and two, we need to address more carefully the vexed issue of freelancers, and what I call ‘the outsourcing of danger’. If networks are not prepared to send staff reporters into hot zones, do they have any right to send others there – for far lower pay, without training or insurance or training, without safety gear?

Maniaty, an ABC television reporter in 1975 and now senior lecturer in international journalism at the University of Technology, Sydney, was a survivor back then. After repor 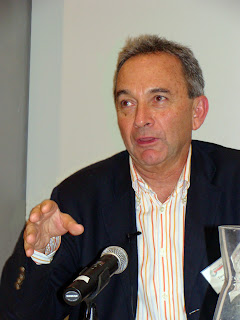 ting on the Indonesian incursions at the border town of Balibo in October that year, he withdrew before the impending invasion. On his retreat, he warned Channel 7 reporter Greg Shackleton and two of his four colleagues from two networks that pressed on to Balibo – and to their deaths. They were murdered at the hands of notorious Indonesian Kopassus commandos intent on stopping the truth about the invasion "softening up" getting to the global media.

The complicity of Australian governments in the cover-up of their murders and the long silence of New Zealand governments about this episode is shameful. Another journalist, Australian Roger East, went to Dili to set up the East Timor News Agency (ETNA) and investigate the killings of the Balibo Five. He in turn was murdered, executed by Indonesian troops in cold blood on Dili’s wharf the day after the December 7 invasion and his body dumped into the sea.

Are we making progress in issues of the duty of care by the news media organisations for their journalists assigned to war zones and to cover dangerous events? How well do journalists know and understand International Humanitarian Law and their rights and responsibilities? With other countries adopting a news media safety code, including Australia, should New Zealand be doing the same?

The deaths of two journalists, both of them foreigners – a Japanese and an Italian – in the civil disturbances in Thailand, are a reminder of the huge dangers facing media workers when reporting in a conflict zone.

Chris Cramer, New York-based global multimedia editor of Reuters News, who had been keynote speaker at the Reporting Wars conferences a year ago in Sydney and Wellin 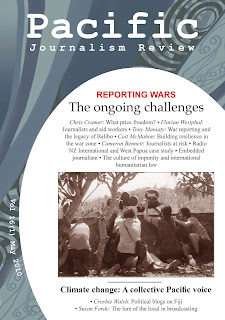 gton, sent an impassioned message to the seminar and noted how committed his own organisation was to safety of journalists and news workers (see video). It is something of a role model. Cramer is also currently president and a founding member of the International News Safety Institute.

Independent New Zealand journalist Jon Stephenson opened the panel debate by suggesting that since last year’s Reporting Wars conferences there had been no real progress made towards addressing journalist safety in New Zealand.

I regret to say this, but our profession has become something of a bad joke. Despite the slogans on the billboards around Auckland it is most definitely not ‘all about the story’… it’s all about the bottom line.

Other speakers on the panel, chaired by PMC advisory board member Dr Camille Nakhid, were TV3’s Mike McRoberts, just back from covering the crushing of the “red shirts” populist insurrection in Bangkok, TVNZ’s Sunday presenter Cameron Bennett, and Kelisiana Thynne, who gave a legal perspective, adding previous Reporting Wars seminars had been more successful than other panellists suggested, having raised considerable awareness of the role international humanitarian law can play in journalism.

Jean-Luc Metzker, head of the Regional Delegation of the International Commission of the Red Cross based in Suva, launched the latest edition of Pacific Journalism Review which is themed on the issue of war reporting and published a number of papers from last year’s conferences and additional research about the safety of journalists. 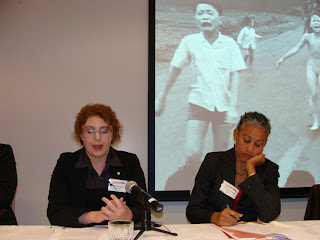 The response to the seminar and film screening was phenomenal. The largest previous response on a media topic at AUT was when 150 came to hear The Independent's Middle East correspondent Robert Fisk in 2008.

It shows this issue of war reporting and safety for journalists amid the growing complexities of today's world, where you can have urban war across the street in some countries and media workers are constantly at risk, is a crucial challenge for the profession. New Zealand media managements haven't been treating the issues seriously enough - and this is at their peril.