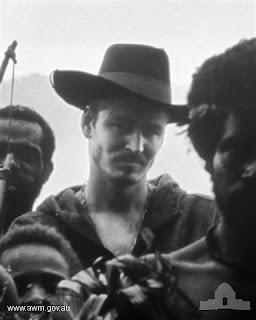 BEN BOHANE is travelling from Vanuatu to Brisbane tomorrow for an exhibition launch of his photo collective with a retrospective of his best war reportage over the years. He is without peer in South Pacific photojournalism, but his remarkable career actually began with a five-year stint in South-East Asia covering warfare in Afghanistan, Burma, Cambodia.

According to his profile on Degree South:

[Bohane] got the first interview with opium warlord General Khun Sa in 1991 and in 1992 he was reportedly the first foreign traveller to go overland from Kabul to Moscow in 80 years.

In 1994, Ben returned to Australia and began covering the much under-reported Pacific region.

He has spent the past 12 years specialising in “Conflict and Kastom” throughout Melanesia and black Australia. While covering every major conflict in the South Pacific – Bougainville, East Timor, Fiji, New Caledonia, West Papua, Papua New Guinea, Maluku, Solomon Islands, Vanuatu and West Papua - he traveled and lived with a variety of tribal and rebel groups and was thereby able to secure the first pictures of BRA (Bougainville Revolutionary Army) leader Francis Ona in Bougainville and the only interview and pictures of Guadalcanal warlord Harold Keke before he surrendered to Australian troops.

He has perhaps the largest contemporary photo archive of the South Pacific in the world. His photographs are collected by the New York Metropolitan Museum of Modern Art and the Australian War Memorial.

Pacific Journalism Review published a photoessay by Ben Bohane in September 2006 (v12 n2) to mark his "Black Islands: Spirit and war in Melanesia" exhibition in Sydney's Australian Centre for Photography. His work has also appeared in Geo, Time, Newsweek, The Guardian, Rolling Stone and other publications. He also regularly makes documentaries for the ABC and SBS in Australia and other networks.

Bohane has just returned from an assignment for SBS Dateline reporting on the controversial huge Exxon LNG project in the Southern Highlands. Militant landowners claim this will turn into "another Bougainville", where a 10-year civil war was fought over the massive environmental and social destruction wrought by the Panguna copper mine.

Amazing work. I never knew about this guy!

Re Ben Bohane's interview with Gen Khun Sa, please note this info came from an old version of the website.

here it says clearly "first interview after he was indicted by the US" which is true.