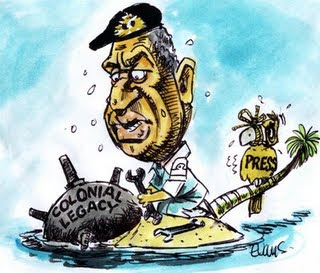 COUP: A Fiji custom first started in 1987 where the celebrants promise a better future. It is held about every five years

Example: The banker said to the coup leader please take this F$200 million and say nothing about it, as the bank does not want it back.

Weapons of Mass Destruction: Guns paid for by the taxpayers of Australia and New Zealand and given to the coup leaders who say prayers and promise to protect babies, old people and the poor.

Example: We say prayers so that they will leave us alone to enjoy our poverty and ill-health in our own hovels.

China: A generous donor who is yet to show us their weapon of mass destruction.

Example: We are communists, and one day you will share all your wealth with us.

Example: I used my weekly pay to go to the match and Traps Bar afterwards. I then went home and beat my wife. I was angry because she asked for money when she knew I had already spent it.

Newspaper publisher: One who is damned to live somewhere else after publishing the news (see Dante’s Inferno for more examples).

Example: He was sent back to Australia although he wanted to live in Suva.

People’s Charter: The eleven pillars or commandments given to Commodore Voreqe Bainimarama with the help of the Catholic Church.

Example: Moses broke the tablets given to him by God ... The modern way is to shoot holes through them and win the heart and minds of the population.
Attorney-General: A person who has the ability to wear all the colours of the rainbow and use all the letters of the alphabet in any one day and smile and smile and smile.

Example: I do not talk out of the side of my mouth, because that would be too obvious to anyone who was looking and listening to me. My totem is a tsunami, and I invite all my critics to come to the beach and see it when it arrives.

Pat, It's smart and must leave you feeling pretty satisfied with your skills, but how on earth do you think this will help Fiji resolve its problems? Please come up with some ideas that help dialogue and "the way forward." Best wishes, Croz