An open letter to the commodore 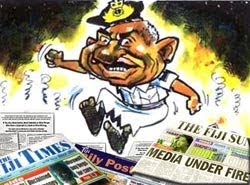 I AM sure you prefer being called by your first name, rather than being than being called coup leader. I know you see yourself as a saviour – but may I say that you seem to be a slow saviour. You move … snail slow towards democracy, vinaka. From 2006 to 2014 is tomorrow and then Election Day – a special day, which I hope will be long, prosperous and full of fair play to the people.

Your media decree is a genuine way to boost the economy. Over the next four years you will be able to make a considerable amount of money from media organisations by collecting F$100,000 from journalists when they refuse to disclose their sources about their news story with the person who said in a mild manner… that your policies

Encourage people to think carefully and restrain themselves from voicing their negative views of the army.

To pay your fines, senior journalists will be able to mortgage their homes, take their children away from school, postpone paying the doctor, ignore their donations to the church and cut back on the food budget.

But… Frank… I see you have been thoughtful of the needs of journalists and left a loophole. Non-payment of the $100,000 fine will allow any journalist to go to jail and be clothed and fed at state expense. Good thinking.

I am sure your self-appointed judges will ensure married journalists with children will get a priority to go to jail before young single reporters. Perhaps, you can lock up the junior journalists at the army barracks. Your men know to do that.

The numerous $500,000 cheques collected from the media organisations will mount up and you will soon have enough money to legally buy The Fiji Times. With a little bit of luck (or military strategy) by 2014 you will own all the media in Fiji except perhaps the internet.

Internet story
It will be sad for you to miss out on owning the internet. It is among your harshest critics and I know that sometimes the information is wrong and often offensive. But, then how else do the people of Fiji, and the rest of the world finds out about Fiji in all its black, white, grey and khaki colours?

A short story for you about the internet. During 2000 when George Speight had his coup, the big Fiji media of radio, TV and the newspapers were uncertain about how to deal with him. The limited information they could glean was crucial for the public to hear and crucial too for the outside world. Getting information out to the rest of the world was difficult.

At the time I was working at the Media Centre of the University of the South Pacific. We managed to record news reports from radio and TV. That information along with on-the-spot reporting by student journalists was forwarded several times a day through the internet to media organisations in New Zealand, Australia, the US and Britain. This process continued for many days even after the overseas journalists arrived. Some of those students now hold key media positions in Fiji.

I no longer teach journalism to students in Suva, but if I was, I would still be helping them understand, learn and practise the Fiji Code of Ethics. It’s a sound code. I would want them to be fearless and to ask questions on the many facets of the problems and needs of society.

Young journalism students could ask… why do you need so many years in power to develop a new Constitution?

I would encourage them to think on questions about how you are dealing with the growing number of poor people in Fiji. Various blogsites tell me the poor are now half the population. Why are there more poor people now than in 2006 – you and your soldiers have been in charge of the country for a long time?

I would get students thinking too, on why we need so many military men in key administrative posts. Hopefully, they are all working towards putting themselves out of work and replacing their jobs posts with civilians. Are they?

About elections
Student journalists may ask you questions on democratic practice? In New Zealand, there are elections every three years. When the voters dislike the government, they tell it to go … and the government goes. Helen Clark went, John Key will go too.

Citizens in Britain are in the middle of a cliffhanger election to decide who they will want to lead the country for the next few years. The citizens’ decision this week does not bode well for the present government, but then democracy is difficult.

I hope you agree with me? If not, what will happen after 2014 when a decision by a civilian elected government angers you or perhaps a junior officer who has modelled himself on your behaviour?

To close off the tutorial and leave students thinking, it would be useful for them to reflect on this recent statement on democracy.

Pacific Beat Story from Radio Australia March 2, 2010
Fiji's military backed regime has announced that any politician, who has played a role in the country's politics, since 1987, will be banned from contesting the promised elections in 2014. The announcement has been made by interim Prime Minister Commodore Frank Bainimarama ...

A reply would be appreciated. Please post it on your favorite blog site