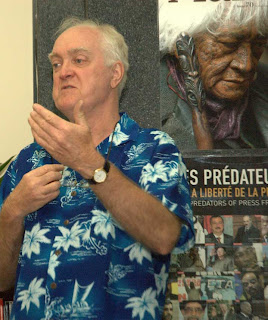 ASIA-PACIFIC civil society and activist movements have been among targets of New Zealand’s spook organisation for more than four decades and the media has failed to ask the tough questions, say campaigners. Murray Horton, secretary of the influential Campaign Against Foreign Control of Aotearoa (CAFCA) and described as “the last radical” in a Christchurch Press profile, gave a devastating critique of the so-called “SIS files” at a packed Pacific Media Centre seminar this week.

Maire Leadbeater, spokesperson for the Auckland-based Indonesian Human Rights Committee and long a leading peace activist, described the infiltration of the Philippine Solidarity Network by informers leaking information to the NZ Security Intelligence Service (SIS). She also spoke about the problems caused by this espionage to a multinational “peace brigade” which travelled to the Philippines in 1989 during the post-Marcos period. The seminar followed recent revelations which showed the SIS had been spying on peaceful citizen groups ever since the Cold War. In Maire’s case, she had been spied on since she was aged 10. Her brother Keith Locke, Green MP and spokesperson on international and Pacific affairs, has also been spied on - since he was elected to Parliament.

The extent of this espionage was exposed when several people in the activist movements requested access to their supposed files – reportedly bound for the archives – in a new period of “transparency” opened up by the Director of Security Dr Warren Tucker.

Murray Horton was particularly scathing about the non-role of the Fourth Estate over the SIS papers, although once the issue became highlighted by the Press, many other journalists jumped to the task. It is also unclear whether selected journalists themselves might have been targets of the SIS: Says Horton:

We basically stumbled upon this ourselves – why weren’t journos asking these questions?

The seminar included Burmese, Indonesian and Filipino activists and journalists, some relating their experiences under surveillance by the SIS or other secret services. Many made the point that while the waste of resources by the SIS (its 2006 budget topped $23 million) was something of a joke in the NZ context, it had sinister and deadly overtones in many developing and totalitarian countries. Said Murray Horton:

It’s happening today and it’s costing lives. In a country like the Philippines, if you’re on the list, expect to disappear any minute.

The previous night, Murray Horton was wearing another CAFCA hat as organiser of the Roger Award for the worst transnational in New Zealand (25% or more foreign owned) – the judges conferred the 2008 prize (an ungainly and sinister looking contraption that has an uncanny resemblance to its namesake, Sir Roger Douglas) on British American Tobacco NZ Ltd. The judges' statement (from a team headed by Victoria University economist Geoff Bertram) declares: “Its product kills 5000 people every year and ruins the lives of tens of thousands.”

Ash (Action on Smoking and Health) director Ben Youdan – who “accepted” the dishonourable award on behalf of shamed BAT – says New Zealand is “waking up” to the sustained public relations campaigns by the tobacco industry. In his Stuff blog Frontline, John Minto quoted the judges saying: "[BAT] perennially refuses to take responsibility for the social and economic consequences of its activity, while maintaining a major public relations effort to subvert the efforts of the New Zealand government to reduce cigarette consumption in the community."

Picture of CAFCA's Murray Horton at the Pacific Media Centre by Alan Koon.