Maire tackles the SIS for breakfast 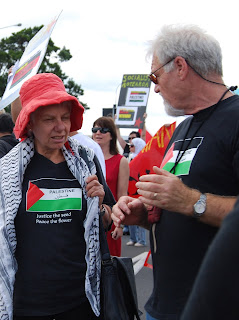 PACIFIC peace campaigner Maire Leadbeater, author of the groundbreaking book Negligent Neighbour about New Zealand's shameful role over the Indonesian occupation of East Timor, was featured on TVNZ's chatty Breakfast show today. But behind all the light-hearted banter about a bygone era of paranoia, there are still sinister overtones for both NZ and the Asia-Pacific region. Maire was spied on by NZ's Security Intelligence Service (SIS) since the age of 10.
In a relatively new era of "transparency", security files have been handed over on request to a group of "activists and agitators". The move, as The Press noted in an editorial, recalls "a whiff of the musty battles of the cold war". After her Breakfast cameo, when she waved her hefty spook file that must have cost the taxpayers pointless zillions, Maire told Café Pacific:

While it's good that the SIS issue is being debated, the issue is more serious than just about the bad old cold war - "reds under the bed" - days. My file, in common with others, illustrates some quite intensive spying - "sources" planted in meetings, stake outs of conferences and so on.
But there is good reason to believe this undemocratic, wasteful activity is still continuing for some groups and individuals. It's possible that with the establishment of the new police Special Intelligence Branch the respective roles of police and SIS have changed a little.

Looking further afield in the Asia-Pacific region, she says:

Anti-communism is still strong in Indonesia, where the spreading of ideas and writing about Marxism-Leninism has been banned since 1967. The dictator Suharto rose to power by dint of a pogrom that wiped out at least half a million people deemed to be communists. Books are still banned if if they are deemed to be supportive of the PKI - the former Indonesian Communist Party - or if they give a "wrong" analysis of the events of 1 October 1965 and the murder of six army generals which triggered the bloodbath.
Indonesia's Criminal Code contains broad articles giving the authorities license to charge people that they consider to be subversive. For one human rights lawyer in West Papua that meant detention for 15 months and a trial for nothing more than forwarding a text message which alleged that the Indonesian Government was planning to cause harm to West Papuans. Fortunately he has just been acquitted. Those who dare to raise the banned Morning Star flag or even depict its design on a bag or clothing run the real risk of going to jail.
West Papuans say that in the towns are villagers "intel" are always lurking and listening. West Papuans say to us "please use your liberty to protect ours". So I guess that is one good reason why we also need to be vigilant about our own freedoms and right to meet and discuss ideas without being spied on!

Pictured: Maire Leadbeater with the Café Pacific publisher at a recent Auckland rally in support of the suffering people of Gaza. Photo: Del Abcede.

CAFCA's secretary Murray Horton - another leading activist who obtained his organisation's SIS files (and then fired off a personal request while a Press reporter was at his office to interview him) - believes New Zealand's security service has behaved in some respects much the same way as communist police states.

Meanwhile, in other fallout from the SIS papers issue, Helen Sutch, daughter of the late leading public intellectual and civil servant Dr Bill Sutch who was at the heart of NZ's most controversial "spy" case, has condemned The Press in a letter of peddling an "urban myth" about her father. Dr Sutch was wrongly accused by the SIS in 1974 of trying to pass off NZ government information to the Soviet Union. In the high profile case that followed, he was acquitted. Helen Sutch wrote:

The Press continues to besmirch Bill Sutch
I am disappointed that The Press continues to purvey an urban myth regarding Dr W.B. Sutch. This myth, that ''the SIS caught William Ball Sutch passing material to the Soviet Union'' (editorial, Jan 29), was shown at his trial in 1975 to be false, and no evidence has emerged
since then to undermine that finding.
While editorials contain opinion, they should not misrepresent it as based on fact when it is not. Instead, please take note of the following easily verifiable facts:
If The Press had been interested in the real historical significance of the release of SIS files, it could have highlighted two important developments in the years since 1975.
First is the movement away from a secret, closed bureaucratic world towards a more transparent society in which the presumption under the OIA is that all information should be
publicly available unless strong arguments to the contrary can be made.
The second development relates to the recognition that the SIS needed to be made more accountable.
Greater governance safeguards are now in place aimed at preventing the abuses of power that New Zealand has suffered in the past.
While Wolfgang Rosenberg, to whom your editorial also casually referred, may have kept his job, his career may well have been damaged, and there are many others, such as the distinguished lawyer Dick Collins, who were prevented from following their chosen careers at all.
Helen Sutch
Wellington

Certainly makes you wonder if friends and family (as well as myself!) feature in these files! It is a sad day when activism of any kind appears to=paranoia.