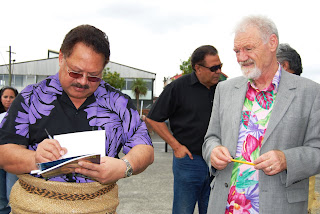 A COUPLE of landmark events have been an inspiration for media diversity in New Zealand this week – but if you relied on the mainstream media for information, you would be sorely disappointed. Journalists in the Pacific region are not usually the most literate of characters and not too well known for depth and insight when it comes to far-reaching ideas with major implications for the region. So milestones like these are refreshing. One event was the launch of a new book by one of the doyens of Pacific publishing and media freedom; the other was the publication of a new newspaper, Indian Weekender, aimed at both the 120,000 Indian diaspora and the mainstream in New Zealand.

Although few books have been written by Pacific journalists, when one does appear it is often a gem. This is the case with Tongan publisher, author, broadcaster – and now philosopher – Kalafi Moala whose second book was published in Auckland this week, In Search of the Friendly Islands. The turnout was great at the Onehunga Community Centre in spite of competing with one of the stellar Pasifika events of the year – Polyfest, which attracts some 90,000 people drawn to the Maori and Pasifika schools cultural spectacular.

Moala, who irked the pro-democracy movement in Tonga with his takeover of the state-owned newspaper Kalonikali (Chronicle) last week through a fuzzy management contract, has written arguably the most brutally honest book to come out of any South Pacific country in recent years. And it takes a perceptive journalist to do this. He is certainly courageous. And the storytelling is engaging. The book has lifted the lid on many hitherto tabu Pacific topics as he examines the psyche of contemporary Tonga and searches for solutions. Pacific Media Watch reviewer Josephine Latu, herself Tongan, sums up his “ideology of domination-oppression”:

In less than 150 pages, the book probes the gross contradictions found in Tongan culture - chronic violence, elitism, and religious hypocrisy, among others, interweaving historical accounts, philosophical reflections, and political analysis with lucid real-life stories. It’s what Moala calls the “Pacific mode of story-telling”.

He argues that the traditional Tongan culture is rooted deep in a system of domination and oppression. But importantly, more than just politics, it involves the power of “men over women, parents over children, aristocrats over peasants, nobles over commoners, teachers over students, priests and ministers over laity, and rulers over people”. It’s how Tongans relate to the world.

Turning to the legacy of “Black Thursday” – the apocalyptic riot in November 2006 (only one chapter is actually devoted to this tragic event that cost eight lives) - Moala is particularly scathing about the current pro-democracy leadership and the foreign “parachute journalists” whom he believes have been misled by rhetoric and self-interest. The book is being launched in his beloved Tonga this weekend.

A day after the Moala book launch, the Indian Weekender was introduced to the crowd at the Holi Mela festival in Waitakere Trusts Stadium by Social Development Minister Paula Bennett. This bright and breezy community paper (with the hint of a lurking political edge) has two old Fiji hands as the key people in the editorial team. Editor Dev Nadkarni is a former 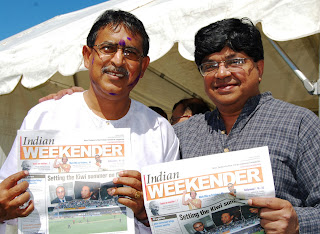 coordinator of the journalism programme at the University of the South Pacific and an Islands Business stalwart while his chief reporter is Thakur Ranjit Singh, a former Fiji Daily Post publisher and now a Waitakere community advocate and current columnist for several publications. Between them, they contributed most of the articles in the first edition of the fortnightly paper.

Nadkarni had a lead story, “Setting the Kiwi summer on fire”, about how cricket and Bollywood are inseparable for Indians. India’s cricketers are currently touring New Zealand and thrashed the locals in one day internationals and in the first of three tests. Nadkarni highlighted a local paper’s headline: “Runslog Millionaires”. He also had articles about the Western world’s double standards over democracy and terror in sport. Singh analyses latest developments in Fiji, the significance of Race Relations Day in New Zealand and explains what happens “when the rhino rages”.

This new paper is a welcome addition to the ethnic publishing scene in New Zealand and another marker reflecting the growing maturity of diversity media. Of course, Bollywood features strongly – some seven pages out of 32, including a fullpage portrait of “The sexiest lucky mascot”, Katrina Kaif.