In defence of Fiji media freedom - and responsibility 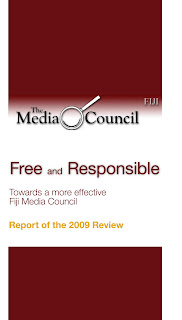 AT LAST, a credible and constructive media review in Fiji. After all the rhetoric, grandstanding and manipulative misinformation on both sides in the sordid Jim Anthony affair, we finally have a report that has sliced through the smokescreens and come up with a workable proposal for the immediate future. It won’t please everybody, of course, but it ranks well alongside the very credible New Zealand Press Council review in 2007 – same year as the long-delayed Anthony report.

Full marks to the Fiji Media Council for deciding to commission its own independent review. But it was a bit late – the initiative had been stolen by the regime supporters. Strangely, the mainstream media has remained rather muted about the report since it became public last week. Could it be that the rather mild criticisms are a bit too much for an industry that has prided itself in its self-absorbed “quality”? There are some high moments for the local media, but there are also some embarrassing lows. And the lows have much to do with the the routine “he said/she said” reports, churnalism and the large number of high school leavers who enter newsrooms with minimal education and limited media training.

The review’s report card acknowledges the fine effort “against the odds” in support of media freedom in Fiji, but for the balancing “media responsibility” category and relations with the government, its verdict is effectively: “Must try harder.”

A “proactive” move by the Fiji Media Council to pre-empt the Anthony report would have saved a lot of angst in the first place. In fact, being more proactive is one of the prescriptions offered by the review team – Australian Press Council executive secretary Jack Herman, Suliana Siwatibau, chair of the Pacific Centre for Public Integrity (not actually mentioned in her report biography note) and former chairman of Munro Leys, The Fiji Times legal firm: “This is particularly so in the area of press responsibility.”

The review quite rightly dismisses the Anthony report, commissioned by the Fiji Human Rights Commission, as “chillingly Orwellian in its main theme: he argued that the only way to preserve media freedom and independence was to sacrifice them.” Anthony's Singaporean model “Media Tribunal” would “inevitably become another arm of government control of the Fiji media”. The review also doesn’t agree with the Anthony conclusion that “self-regulation has failed”. But it does go on to raise several suggestions for improving self-regulatory processes in Fiji so that they are more credible.

Panel members looked back to an earlier media industry review (Thomson Foundation, 1996) for some guidance and noted several points raised then which they believe still need to be addressed:

The main concerns are that the council is not of sufficiently high profile, that it has not been active enough in pressing for improvements in media standards, and it has appeared more frequently to be vocal about the need for media freedom, without a concomitant voice of media responsibility.

The main obstacle cited was a lack of funding, with the council relying on the “goodwill” of a voluntary chair and secretary and no professional administration or office. The review complimented inaugural chair Daryl Tarte and secretary Bob Pratt in “seeking to safeguard the freedom and independence of the media in very challenging circumstances” in the wake of four coups over two decades.

But in the absence of regular [council] reports, and of the council being as outspoken on the occasional lapse in media responsibility as it is in defence of media freedom, the perception has emerged that the Media Council has not performed up to its own high ideals … This need to better balance the freedom and responsibility aspects of its activities was a constant theme in submissions…

The review also questioned the media organisations’ commitment to the council. It called on members for stronger observation of “ethics and standards” and to at least double the financial commitment (from the current F$30,000 a year budget).

There is no doubt that the Media Council, to be effective, needs to raise its profile within Fiji society – and to be seen as a body committed equally to press freedom and press responsibility. All sections of the society to whom the review spoke, including government, want to see free media informing the public on matters of public interest and concern. A robust and well-respected Media Council will greatly assist that task: there will be less need for sections of the society to issue calls for a regulatory oversight of the media where a high-profile Media Council is seen as effectively and efficiently carrying out its tasks, and offering a free complaints procedure to the consumers of media.

Recommendations include:
Among other recommendations, the review panel called for a “working journalist” to be a representative on a restructured, more streamlined council, The panel also noted in a section about training that the council “might well play a part in improving work conditions – and thereby standards”.

So what now of the media law “promulgation” long promised/threatened by the government? Hopefully, it will be tossed into the regime’s waste bin. Give the Fiji Media Council a chance to get its house in order.

What time frame should FMC get its house into order?

Should the current chair and excutive secretary of FMC remain in house or continue.
I believe new blood should be brought in to FMC.

Furthermore FMC positions should not be a revolving door for aging Media types.