GLOBAL reaction has been applauding France. Media and politicians have given Paris a big tick for finally coming to terms with its post-war militarist legacy with a compensation plan for the Algerian, French and Tahitian nuclear veterans - some 150,000 of them - after a half century of nuking remote parts of the Sahara and the Pacific. Not so fast... On closer scrutiny, the bill unveiled by Defence Minister Herve Morin is revealed as something of a cynical sham. Café Pacific's David Robie talked about this today in an interview with Radio Live host Finlay Macdonald.

The 10 million euros (about NZ$24 million) compensation plan pales into insignificance when compared with the US$500 million paid to the Marshall Islands (and the Marshallese are agitating for a further $2 billion). "French governments believed for a long time that opening the door to compensation would pose a threat to the very significant efforts made by France to have a credible nuclear deterrent," Morin told Le Figaro. "But it was time for France to be true to its conscience."

However, Roland Oldham, president of the French Polynesian nuclear test veterans movement Moruroa e Tatou, dismissed the plan as "peanuts". He told Radio New Zealand: "It really is peanuts when you compare how the French government spends a lot of money on defence." The Algerian veterans are juat as unhappy. According to Abderahmane Laksassi, head o 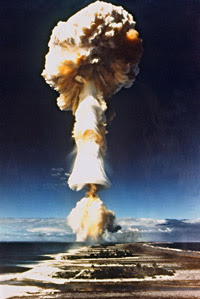 f the 13 February 1960 Association - named after the date of the first French nuclear test near Reggane in the Sahara desert - "It's a good first step but I'm not satisfied." He dismissed a "little pension" for victims as inadequate compensation. "We want France to build a hospital for the victims," he added.

Also, the Morin bill is a poor imitation of an earlier draft law that had gained universal acceptance from all parties in the French National Assembly. The veterans' groups were much happier about this.

In mid-October 2008, the lobbying group Vérité et Justice (Truth and Justice) had outlined a draft bill that gained support from Moruroa e Tatou and all political parties. Features included:
Nic Maclellan backgrounded this draft law well in a paper posted at the Medical Association for Prevention of War website. Just days before this draft law was due to be tabled and debated in the National Assembly, the Morin bill was introduced instead. And the three key elements above have been removed or watered down. The cynical view is that the Morin bill in in fact designed to reduce the number of eligible people to bring compensation claims. While in metropolitan France descendants of a victim can still bring a compensation case, in Tahiti only surviving widows can do this.

In September 2008, an industrial relations tribunal in the Tahitian capital of Pape'ete ruled that France must account for the consequences of nuclear testing on the health of the Maohi people. Three former workers who claim leukemias, or blood cancers, were caused by nuclear testing will try to prove their case. Five Tahitian widows of five workers who died of leukemia also have legal cases pending against France.

France conducted 210 nuclear tests over more than 40 years - four atmospheric tests and 13 underground tests in Algeria (1960-1965), and 46 atmospheric and 147 underground tests at Moruroa and Fangataufa atolls (1966-1996). The Greenpeace environmental flagship Rainbow Warrior was bombed by the French secret service in Auckland on 10 July 1985, an act of state terrorism that hastened the eventual end of nuclear testing in 1996.

Footnote: According to the New Zealand Herald, one of the French secret agents involved in Operation Satanic against Rainbow Warrior, Dr Xavier Maniguet, 62, died in a plane crash in the French Alps last week. He was one of four men who smuggled the limpet mine explosives into New Zealand on board the yacht Ouvea.